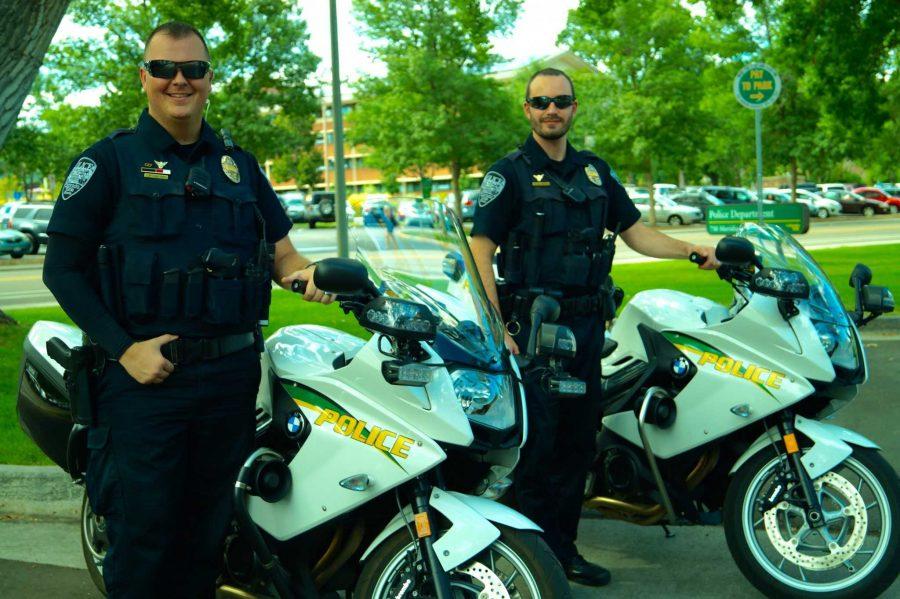 The CSU Motorcycle Officers with their new modern bikes at the campus Police Department.

Some police officers ride bikes or drive cars, but on campus, there are also police officers zipping around on BMW F800GT 2014 motorcycles. These are the Colorado State University Police Department officers who have chosen to use motorcycles to do their jobs.

CSUPD currently has three officers on its team who are certified to do their jobs on a motorcycle, according to Lt. Adam Smith. He said they are useful when it comes to emergency and high traffic situations.

The Collegian interviewed Smith to find out more about the use of motorcycle cops on campus.

Collegian: How long have motorcycle cops been a part of the CSUPD and a part of campus?

Smith: We’ve had motorcycles for many, many years now.

Do motorcycle officers have any additional responsibilities?

The officers are the same as all other officers — they have just decided to use a motorcycle as a vehicle. They still respond to calls the same as any other officer would. If an officer decides that they would like to use a motorcycle, they do have to complete an 80-hour, two-week police motor cycle school in addition to their regular officer training. It is all about how to be an officer from a motorcycle. It is an extremely difficult, very intense course.

What are the benefits to having motorcycle cops on campus?

Motorcycles are a force multiplier and are much quicker than other police vehicles. They are smaller, lighter and quicker. They make our patrol more versatile. They allow officers to go places and do things that a traditional officer wouldn’t be able to do. Sometimes in the middle of the day with high traffic, an officer could use sidewalks, bike paths and open areas to respond to emergencies more quickly. Motorcycles allow a different type of law enforcement on campus than traditional police vehicles.

Motorcycles are great at directing traffic at football games and other big events. Our team assisted traffic for the USA Pro Challenge. An officer on a motorcycle can successfully negotiate traffic to get where they need to go. Especially during the day, when bike and pedestrian traffic is highest on campus, a motorcycle will be able to get places quicker during emergencies. An officer on a motorcycle will almost always be bale to reach an accident faster than a traditional police vehicle.

Motorcycles are a big part of enforcing bicycle regulations on campus.

How are motorcycle officers able to connect better with the community?

I encourage all CSUPD officers to engage with CSU as much as possible. Part of our service is building relationships. Similar to bicycles, they are more approachable — an officer can engage with the community and does not have the four walls of a car between the officer and the community.