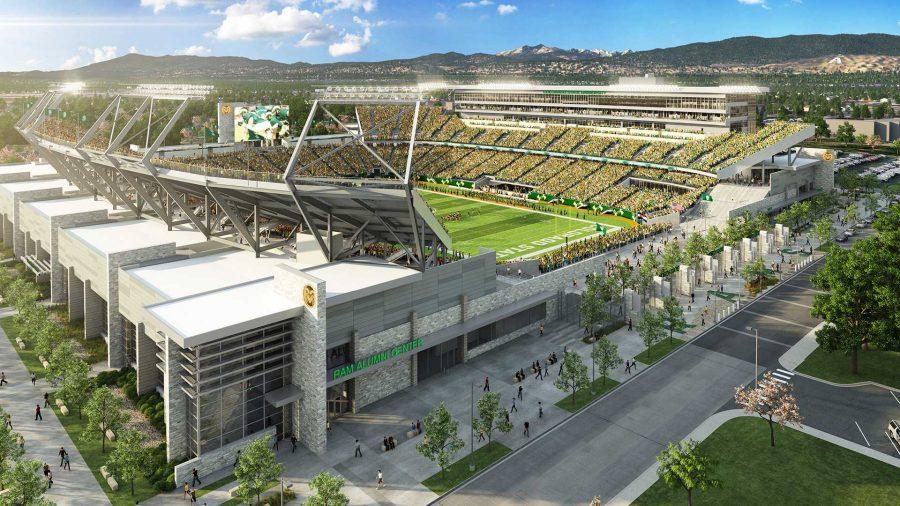 Just hours before Saturday’s football game, Colorado State University alumni, fans and administration gathered at the on-campus stadium construction site for the project’s kick-off celebration. CSU Athletic Director Joe Parker started off the ceremony with a brief stadium history, saying that CSU has had Hughes for almost 50 years and it is time for a new stadium.

“CSU had an opportunity to overcome complex challenges at Hughes Stadium,” said CSU President Tony Frank during his speech at the end of the ceremony.

Parker also said that, because Hughes Stadium is off-campus, alumni and fans do not get to “drive onto this beautiful campus.”

“We’ve lost this connection to our alma mater,” Parker said.

CSU football coach Mike Bobo said he is excited for people to “come home” to this new stadium because it is on campus.

Executive Director of the Alumni Association Kristi Bohlender said that the stadium will not only welcome alumni, but it will provide them a space to remember their CSU heritage and connect with each other.

“The Alumni Center will feature Heritage Hall to show the history of CSU,” Bohlender said.

Bohlender said that CSU alumni are some of the most active university alumni; from coming to campus to talk to students, to hiring CSU graduates to giving “generously back to CSU.”

Vice President of Student Affairs Blanche Hughes took the audience through a journey around the stadium construction site. Hughes told the audience to “imagine” new students going into the offices in the academic portion of the stadium while graduating seniors meet with their advisers in the stadium academic offices to discuss options after graduation.

“Think about how cool this is,” Hughes said. “Can you tell I’m excited?”

Hughes said the stadium is more than just for academics and athletics — it is for the students. “Students can stop by to study, meet with friends or take a nap,” Hughes said.

Hughes said that at other university’s on-campus stadiums, she saw a more cohesive community of students and enjoyed watching the students at those universities pour into the stadium directly from campus. ‘

“We were missing this wonderful opportunity to bring our students together,” Hughes said. “The students will be ready for this stadium, (and) I hope you all are ready, too.”

Frank took time to acknowledge protesters during his speech.

“They’ve seen the same information we have and have come to a different conclusion,” Frank said. “Their criticisms have made us check everything not once, but two or three times.”

Protesters that ranged from CSU students to Fort Collins residents gathered outside the stadium before the event holding signs with messages like “Stop the Stadium” and “Stop Frank’s Folly.” During the event, attendees could hear protesters yelling things like “immoral” and “corrupt.”

“It will cause a lot of traffic and noise,” Redd said while protesting outside the ground-breaking event. “I know a lot of citizens aren’t interested in a new stadium.”

Junior political science student William Clem said that he, along with his student organization Spotlight on the Stadium, is focused on mitigating the negative factors that will come with the stadium because they recognize stopping it at this point is unlikely.

“I’m here to show Tony Frank that even though he pushed the stadium through, we are still against it,” Clem said. “Economically and ecologically, it’s a disaster.”

Parker said he believes they have done everything they could to address the concerns of the citizens and students.

“The group that we saw today, I’m not sure exactly what they would want other than to see us not continue with the project and that’s not going to happen,” Parker said during a press conference after the ceremony. “The reality is that we’ve committed to moving forward and we’re going to work hard to create an experience that the entire community can appreciate.”