CSU history professor appears on ‘Who Do You Think You Are’ 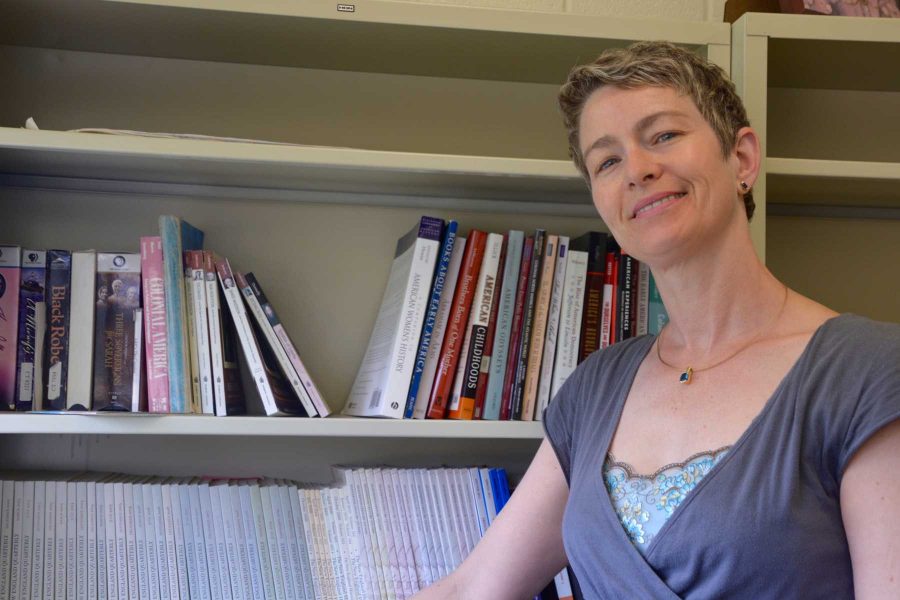 Ann Little, an associate history professor at Colorado State University, appeared on "Who Do You Think You Are," tracing the ancestors of Tom Bergeron's family. The show reached out to Little because she is an expert in French-Canadian women's history. (Photo Credit: Megan Fischer)

As one of the few experts in her field and because she knows how to read French, Colorado State University associate history professor Ann Little appeared on the TLC ancestry reality show “Who Do You Think You Are?”

Little appeared on an episode that featured Tom Bergeron, host of “Dancing with the Stars,” searching for a family member in his ancestry.

Editor’s note: The Collegian interviewed Little about her experience on the show and her field of expertise. This interview was edited for clarity.

Tell me about how you ended up on the show.

A researcher for “Who Do You Think You Are?” contacted me earlier in the spring sometime — I assume because they found me through my faculty profile at CSU. I’m one of the few Anglophone experts on French-Canadian women’s history that there are. This researcher contacted me with a few questions about les filles du roi, which were a famous effort as a part of the French Crown to bring French wives to French-Canadian captains, and to help them raise French families rather than marry Indian women and have native families. The celebrity they were researching, Tom Bergeron, is from a French-Canadian background and they decided to do this connection with his ninth great-grandmother (Marguerite Ardion) and her connection to the filles du roi. I was just spitballing ideas with this researcher because it was fun, and I always enjoy talking to people who have an interest in what I do. I wasn’t really thinking about being on the show and being on camera — I just wanted to talk about women’s history with this guy. We sent emails back and forth for about a month, and then he told me the producer and the director of the show wanted to meet with me and talk with me more about some of the story-lines they were pursuing. That’s, I think, when the director decided there would be an on-camera role for me.

How was your experience on the show?

I have to say, my brush with Hollywood and the industry was really fascinating, and I think the people doing that kind of work are incredibly smart and honest — they seemed to be really committed to telling interesting stories, yes, but also in historical accuracy and getting the details right. It was really fun. When the show got shot, it was totally unscripted. It was just a natural conversation.

How did you get into French-Canadian women’s history?

That became something that I learned about in order to write my second book, but my first book, “Abraham in Arms,” was a study of the border wars between New France and New England, the area that’s now the northeast of the U.S. and Canada. I got into some Canadian history in that book and in the course of researching for that book, I came across an individual who had a fascinating history, Ester Wheelright. She was born a little English girl in Massachusetts, in a town called Wells, which is now in Maine. She grew up there for seven years and then at the age of seven, she was taken captive by the Wabanaki Indians and she lived with them for five years. … At the age of 12, somehow, she appears over the border in Quebec City living in the house of the governor, and she’s enrolled in the Ursuline Convent in Quebec. (She) stays there the rest of her life and becomes a choir nun, and ultimately she becomes the first and only foreign-born Mother Superior of the order. I think the fact that she was an English-born Mother Superior may have helped the convent in relationships with the English officers. She (Wheelright) spent 72 of her 84 years in the convent.

What about French-Canadian women’s history fascinates you?

I only did my research in French-Canadian women’s history to understand (who) Ester Wheelright’s peers were in the convent. There’s not much stuff out there, neither in French nor in English. I think Canadian history, as like American history, has overlooked early American women in favor of telling stories of explorers and fur traders and trappers: the heroic male narrative of history.

Little’s second book, “The Many Captivities of Ester Wheelright,” is in production and is set to release next fall.

Collegian Reporter Megan Fischer can be reached at news@collegian.com or on Twitter @megfischer04.