CSU fraternity responds to complaints about confederate flag in window 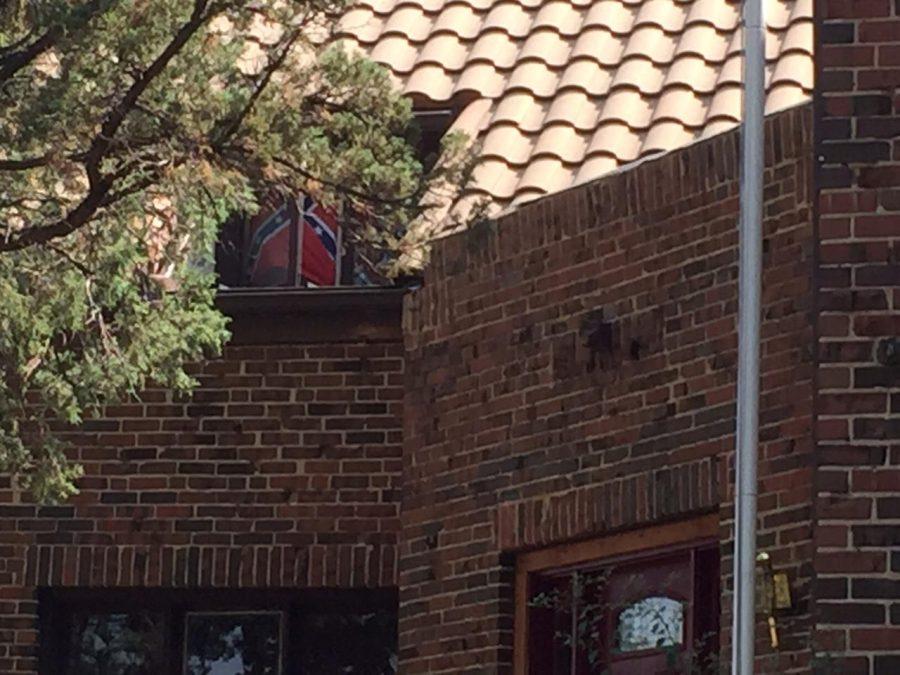 The flag, as seen from outside the Phi Kappa Tau fraternity house.

Phi Kappa Tau‘s Colorado State University chapter received complaints about a confederate flag hanging in a window of its house — fraternity members claim the flag was not a confederate flag, but a South Carolina flag that displayed similar symbols.

“The Division of Student Affairs notified the fraternity that it had received complaints about the appearance of the flag, and worked with both local members and the national organization to ensure there was a realization that the flag did offend members of the community,” according to a University statement. “The flag was taken down in part as a result of that notification.”

The flag is no longer visible from the outside of the house.

According to a fraternity statement, students often display state flags “as a reminder of their homes or special individuals in their lives.”

“Recently, one of our brothers displayed in his window a single flag he had received as a gift from his graduating best friend who hailed from South Carolina. The flag, in a simultaneous acknowledgment of history and embrace of modernity, combines both the current South Carolina ‘Palmetto State’ flag and a historic ‘stars and bars’ flag,” the statement said. “Despite the fact that the flag did not represent a breach of any CSU policy, Colorado law or Fort Collins ordinance, the members chose to avoid further controversy and promptly removed the flag — which had been hung without even a trace of ill will — for good.”

Irene Vernon, chair of the ethnic studies department, sent an e-mail to all CSU ethnic studies majors and minors with a photo of the flag attached, denouncing the “use of the confederate flag in the window of their house.”

Vernon said that regardless of whether it was an official confederate flag or not, the action was still offensive.

“I found that his decision to only display the confederate portion of the flag was intentional and meant to offend,” Vernon said in an e-mail to the Collegian.

In March, Phi Kappa Tau received backlash after reestablishing the fraternity at the University and attempting to rent a house in a residential area, at 201 E. Elizabeth St.

Neighbors in the area protested the fraternity moving in, and fraternity members said they were frustrated by what they perceived to be a reaction based on stereotypes.

In a campus-wide e-mail following the release of a University of Oklahoma fraternity video featuring members chanting racist terminology, President Tony Frank said that in situations of racism, “as individuals, the most important thing we each can do – and this is as simple as it is obvious – is not to be racist. But I would also suggest that we – as members of a learning community – have a particular obligation to stand up and push back against such behavior.“

In the Phi Kappa Tau statement, the members asserted the flag’s importance as a part of history.

“Like the stars and bars that inspired this flag, we consider this affair to be history — but history that nonetheless merits an accurate recording.”

The Collegian news desk staff can be reached at news@collegian.com.