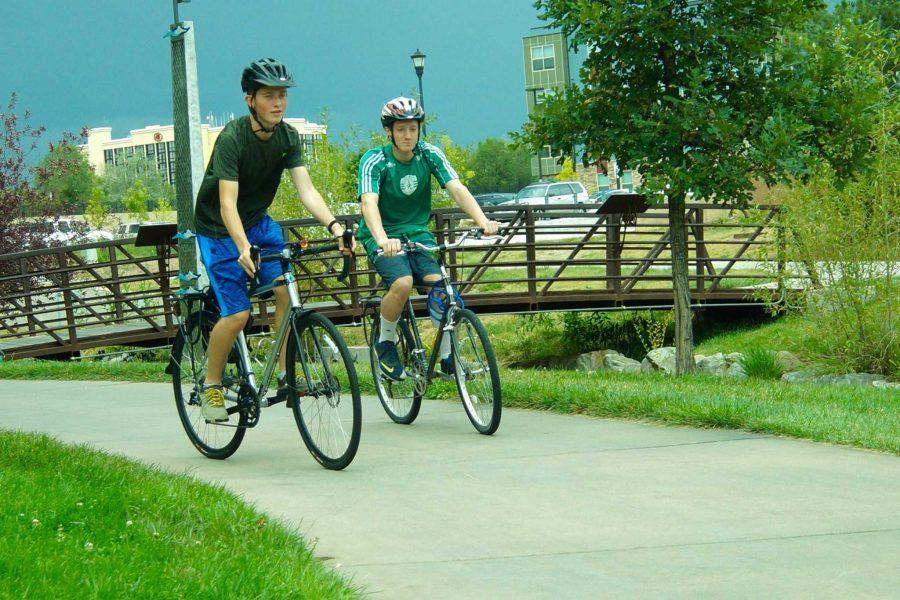 Alex Claiborn and Ethan Ganster, both 14, biking at Spring Park on the relaxed Labor Day holiday on Monday 7th.

With bike counters installed around the city and on campus, the data they provide might help make necessary bicycle infrastructure improvements.

There is currently one bike counter installed in Fort Collins, located where Mason Trail and Spring Creek Trail intersect, according to City Bike Manager Tessa Greegor.

That counter was installed by the Colorado Department of Transportation in coordination with the City of Fort Collins, and is being used as a test site for the rest of the state, according to Colorado State University Alternative Transportation Manager Aaron Fodge.

“Across the state, there are thousands of permanent and temporary vehicle counters, but there’s really only like 20 permanent bike counters,” Fodge said.

Bike counters provide useful information, such as popularity of a trail or where a lot of people are riding. This information can be used to make improvements, said Fodge.

With the counter on the Mason Trail, Fodge said the data makes it easy to tell when the students came back to Fort Collins.

“Imagine if those people didn’t have a chance to ride a bike,” Fodge said. “That’s a thousand more car trips.”

All the data from the counter in Fort Collins is shared with the state so it can be used to make improvements, said Fodge.

The data also shows peak times when people are commuting or riding on the trails, said Fodge. There are peaks in the morning, around noon and in the late afternoon to early evening. There is a recreation pattern on the weekends, when the data shows people riding on the trail later in the day.

Fodge said the data from the bike counter shows that people are riding through campus.

“We don’t want the campus to be a barrier,” Fodge said. “This tells me that they are willing to come through campus because we built this new trail (the Mason Trail).”

Permanent bike counters will be installed on campus in the next week, according to Fodge. The newly available data will hopefully show how people come on campus on bikes.

The City of Fort Collins is installing a type of bike counter called an Eco Totem.

“It tells you in real time how many bikes have passed by,” Greegor said.

The Eco Totem will be installed as part of a project called the Remington Greenway, which is a large project, part of the Transportation Master Plan created in 2010-2011 to make Remington Street easier for bicyclists.

CSU will pay for the electricity for the Eco Totem, according to Fodge.

“We use the data (from bike counters) to inform future bicycle infrastructure improvements,” Greegor said.

Henry Joyner, a wildlife and conservation biology sophomore, said he frequently bikes on Laurel, Shields and Elizabeth streets and has enjoyed the infrastructure improvements that have been made, especially on Laurel Street.

“Having a more visual barrier between the bike lane and the rest of the road makes me feel significantly safer,” Joyner said.

Joyner said most roads he has ridden on in Fort Collins have a bike lane, but he has noticed that some areas on Prospect Road do not.

“I don’t know if a bike lane would be a realistic renovation to the road, but it would be nice,” Joyner said.

Collegian Assistant News Editor Sady Swanson can be reached at news@collegian.com or on Twitter at @sadyswan.