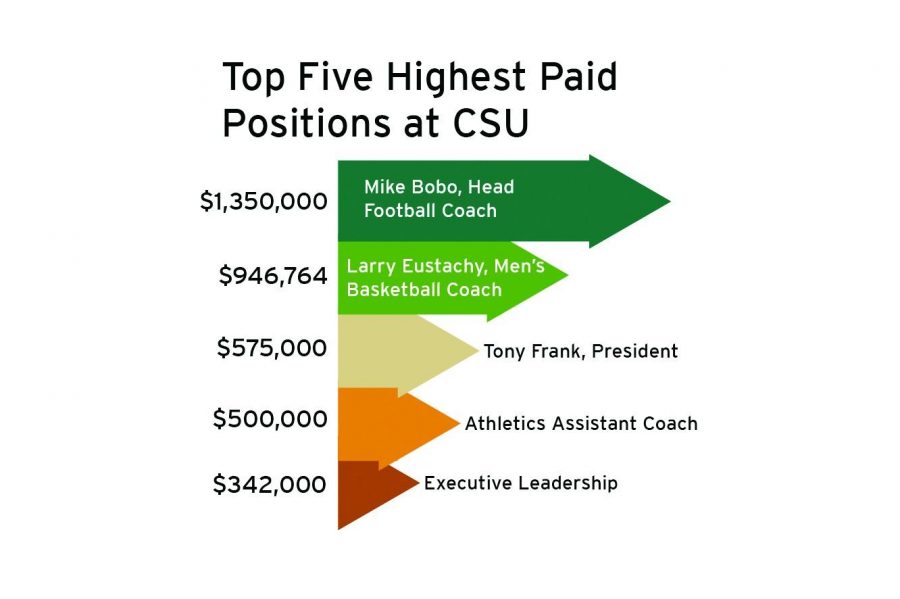 Mike Bobo, head football coach, is in his first season at CSU and makes top dollar by a large margin: $1,350,000 annually.

“Colorado State University President Tony Frank announced the appointment of Mike Bobo as head coach of the Rams’ football program on Dec. 23, 2014,” his online bio says. “Bobo is the 22nd head coach in the history of the program, and came to Fort Collins from the University of Georgia, where had spent the previous 14 seasons, including the last eight as his alma mater’s offensive coordinator.”

Larry Eustachy, head men’s basketball coach, comes in second, earning $946,764 a year. Eustachy is in his fourth year at CSU.

“In his first year at the helm, Eustachy led the Rams to arguably the best season in school history, guiding the squad to a program-best 26-9 record, and an NCAA Tournament victory over the Missouri Tigers before bowing out against eventual national champion Louisville,” Eustachy’s online bio says.

A distant third is President Tony Frank, who makes $575,000. He was appointed in 2008 and received the title of Chancellor of the Colorado State University System June 1.

Rounding out the top five are an athletics assistant coach whose name is undisclosed and a member of the executive leadership, also undisclosed. They make $500,000 and $342,000 per year, respectively.

According to the CSU employee roster, over 60 administrators and faculty members make at least $200,000 annually.

Collegian Reporter Julia Rentsch can be reached at news@collegian.com and on Twitter at @julia_rentsch.