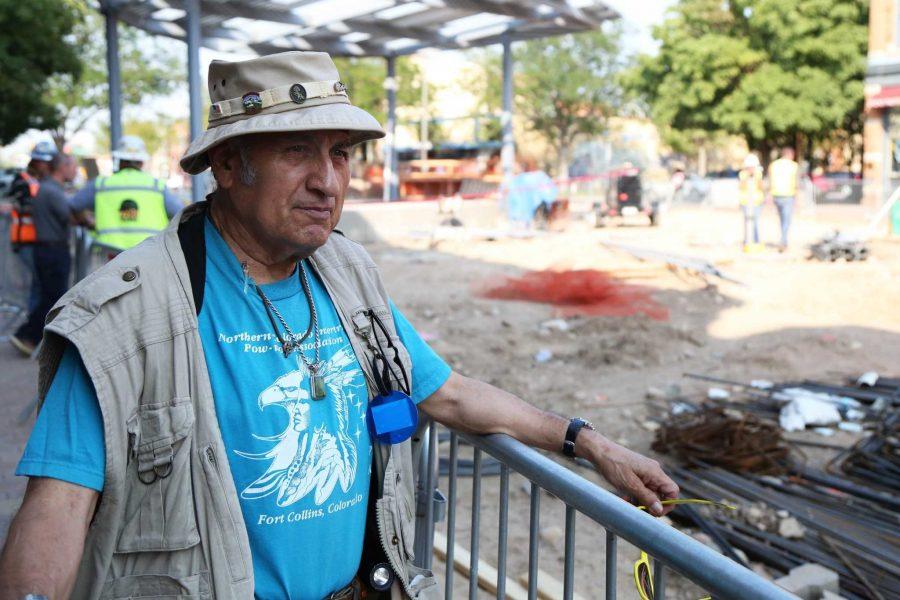 Native American veteran, David Valdez, looks on to the changes being made in Old Town Square after he has been living in Fort Collins since birth. (Photo Credit: Amanda Garcia).

The $3.9 million Old Town Square renovation is currently three weeks behind schedule due to weather, according to Councilman Ray Martinez. The complete renovation that began in March of this year is estimated to continue until October.

Funding for the $3.9 million project comes from a combination of money from the City of Fort Collins and the DDA, including some grants and donations, according to Robenalt. A $200,000 grant was given by the Bohemian Foundation, while an additional $55,000 combined donation was given by existing Old Town properties, Robenalt said.

Old Town Square was designed in 1981 and has been around for almost 36 years, which is the main reason for the new renovations.

“Old Town Square was designed in an era that was different in terms of how public spaces are designed today,” Robenalt said. “The renovations project is looking to recognize that the Fort Collins community has grown and how the public uses the plaza has changed over time.”

Students can expect many new amenities to come after the renovation is finished.

According to Robenalt, some of these new features will include a new fireplace located toward the south end, a rehabilitation of the old fountain, an interactive water feature in the north part of the plaza, a new stage and additional trees for shade.

Councilwoman Kristen Stephens is looking forward to the improved plaza.

“We all take a pride in our city,” Stephens said. “Old Town Square is what many people feel is the heart of the city. Really, to be just a part of that and to work together to make it a better and fresher place for our community, I think that that’s pretty exciting. I think it will be a really nice new space for our community to gather.”