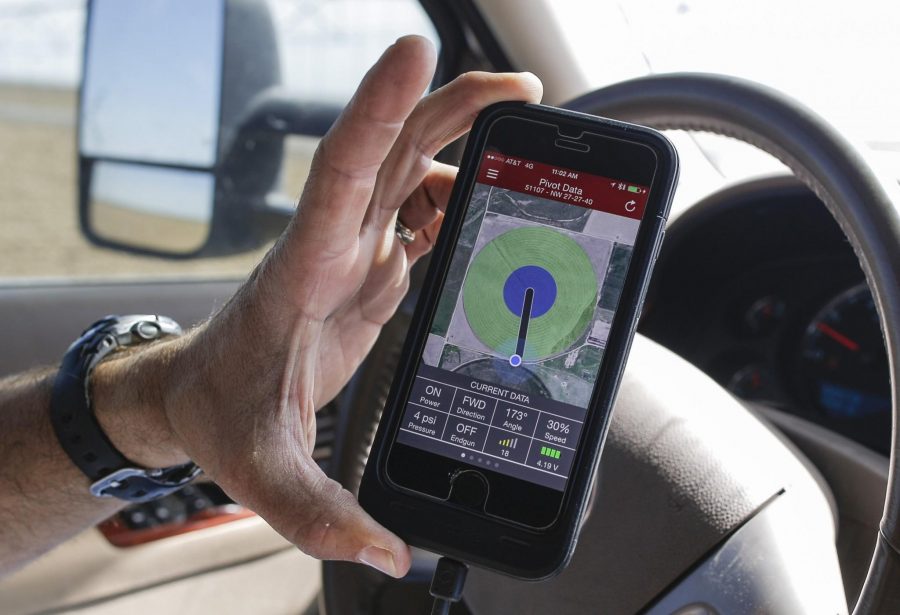 Brant Peterson uses his iPhone to check his irrigation pivots in his farm on June 10, 2015 in Stanton County, Kan. Peterson says he's noticed that the Ogallala aquifer, from which he draws to irrigate his crops, has declined rapidly in recent years as Kansas experienced a drought. His farm got just seven inches of rain a year for six years. During that time, the water level in his wells dropped by more than half. "To me, I'm as efficient as I can be with my water," he said. "The only thing I can do to conserve is to cut back acres." (Travis Heying/Wichita Eagle/TNS)

SAN FRANCISCO — Apple has announced plans for a new product event Sept. 9 in San Francisco, where the giant tech company is expected to show off new iPhones and other gadgets eagerly anticipated by consumers.

Invitations for the event next month were sent to reporters and analysts Thursday morning. In usual fashion, Apple is only hinting at what to expect. But in previous years, Apple has used an event in September to launch new phones.

The invitations mention Apple’s digital assistant, Siri. Apple has previously said it plans to expand Siri’s features in the new version of its operating software for iPhones and iPads, and there have been reports that Apple will integrate the technology into the next version of its Apple TV set-top box, which the company is also expected to announce at the event.

The key feature of the new iPhones, likely to be called the iPhone 6S and iPhone 6S Plus, is expected to be Force Touch, a pressure-sensing technology that Apple introduced this spring with Apple Watch and its new MacBook computer. Force Touch can detect how hard a user is pressing on a touch-sensitive service. A device with Force Touch can display different information to users depending on how hard they press on them.

The next version of Apple TV is expected to have a faster processor and an updated interface. It’s also expected to feature an application store for the first time, potentially opening up the device to a far wider range of apps and channels than it has currently.

The update, which has been rumored for the past year, is a long time coming. Apple last refreshed Apple TV in 2012.

Apple is also expected to announce the release of the next version of WatchOS, the operating system that underlies Apple Watch. The next version, which the company previewed in June, will allow applications to run directly on the device and tap into more of its capabilities, rather than having to run on a connected iPhone.

The event will be held at the Bill Graham Civic Auditorium in downtown San Francisco.