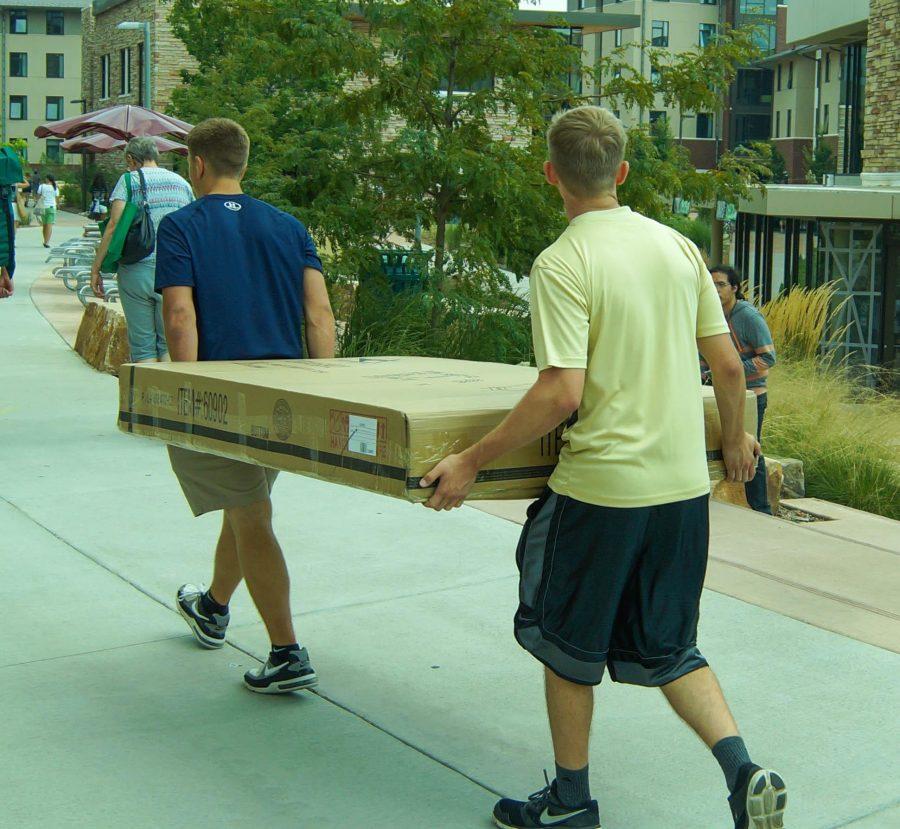 Throughout the past weekend, Colorado State University has been overtaken by almost 6,200 students, moving boxes, crowded parking lots and touring parents.

This year, CSU will reach a record high of returning students and incoming students, according to SOURCE. With so many incoming students, keeping campus functions as sustainable and green as possible became a high priority for Tonie Miyamoto, the communications and sustainability director for Housing and Dining Services at CSU.

According to Miyamoto, promoting green initiatives during move-in is important because it engages students in the conversation about sustainability from day one.

These initiatives included 18 cardboard and styrofoam recycling corrals around campus and serving only compostable and recyclable items during the First-Year Student and Family Picnic.

“The Ram (Welcome Team) took care of all the recycling sorting, so I didn’t have to worry about it,” said incoming freshman Mark Dingee, a business major. “Moving in was fun.”

The piles of cardboard around campus were properly disposed of by CSU Facilities Management, while the food waste from the picnic was composted at the CSU in-vessel composter on the Foothills Campus and will later be returned to campus as a soil fertilizer.

According to Miyamoto, the styrofoam recycling partnership with Gallegos Sanitation was a new addition to the move-in process this year.

Another new green addition to move-in was an expanded route for Around the Horn, the on-campus shuttle.

“Around the Horn had more than 100,000 rides last year in its first year of operation, so we are excited for the expanded route this year,” said Miyamoto.

The Horn helped shuttle parents and students around campus and to parking lots, including one new parking lot on Research Drive near the Veterinary Teaching Hospital. This 900-space lot opened Thursday.

The Spoke Bike Room was also in full swing helping students get their bikes registered, fixed and ready for the new semester. The Spoke is a student-employed bicycle maintenance and educational service, which started in 2011. The Spoke gives students the option to have their bike conveniently fixed on campus, while getting a free lesson on the maintenance.

As an incentive, the service fee for fixing a student’s bike is reduced if the student agrees to stay for the bike repair lesson. The Spoke will be open 1-4:30 p.m. Monday through Friday.

In addition to the recycling options and green transportation services on campus, there is another way students can get involved with the green conversation at CSU: the Eco-leaders program.

The Eco-leaders program started in 2011 and allows one freshman from each dorm the opportunity to help engage fellow students in environmentally-responsible behaviors, while raising awareness about sustainability issues and helpful green resources at CSU.

Eco-leaders work three to five hours per week on various projects including developing plans for Earth Week and engaging students in the Green Warrior campaign.

“Last spring, CSU became the first university in the world to earn a STARS (Sustainability Tracking and Rating System) Platinum rating,” Miyamoto said. “Earning this achievement certainly demonstrated that we are a green university. … I am proud of where CSU is today, and I look forward to all the sustainability initiatives in front of us.”

To find out more about CSU sustainability, visit the online living green on campus tips and the CSU recycling guide.

Collegian Reporter Madison Brandt can be reached at news@collegian.com and on Twitter @Mademia_93.