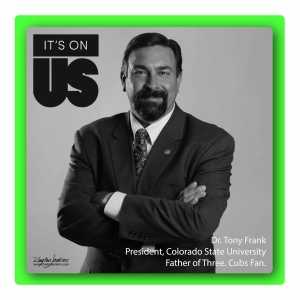 It’s on us to stop sexual assault.

This message has been spread throughout the nation as part of a campaign to raise awareness and empower bystanders to step in and help prevent sexual assault.

Fort Collins has partnered with Colorado State University, the Sexual Assault Victim Advocate Center and other organizations to become the first city to be nationally recognized as an It’s On Us community.

This effort was spearheaded by Councilmember Gino Campana, who said he was alarmed by the number of recorded sexual assaults he was seeing in Fort Collins. There were over 850 cases recorded in 2014.

“We as a community are taking responsibility and feeling empowered to make a difference with regard to sexual assault,” Campana said. “It’s time to step up and address the issue.”

A big part of the campaign is spreading awareness. The city has started a poster campaign for It’s On Us, and will be putting 20 different posters with different community members in order to raise awareness. One of these posters displays CSU President Tony Frank.

“CSU is proud to support the City of Fort Collins in becoming the first It’s On Us community in the country, and I was happy to show that support by joining in their poster campaign,” Frank said. “CSU has been part of It’s on Us since its inception because we all have to  play a role in stopping sexual assault and interpersonal violence on college campuses. With our own campus ReFrame initiative and the leadership of our students, we’re sending a strong message that this is everyone’s issue, that CSU cares, and that we all need to step up and demand change.”

The ReFrame initiative has been working to spreading the conversation on sexual assault throughout the CSU campus. CSU Women and Gender Advocacy Center Director Kathy Sisneros said that the two campaigns work well together.

“ReFrame resonates here on campus, but students function off campus as well as on campus, so It’s On Us is a nice bridge to the Fort Collins community,” Sisneros said. “They compliment each other.”

The Fort Collins SAVA center will be doing much of the work to implement the It’s On Us campaign in the city. To spread the message, Executive Director Jennifer Jones Markiewicz said a different strategy will be taken with different sectors of the community.

“We want to reach the entire community in a way that makes sense to what they are doing on a day-to-day basis,” Markiewicz said. “For instance, we want to work with the bar and restaurant community and hold a training session so that they have a better idea on how to deal with the sexual harassment that goes on in bars and restaurants.”

Markiewicz also said that SAVA hopes to work with teachers in the Poudre School District to help them identify uncomfortable situations in classrooms.

The campaign’s main idea is to spread the conversation beyond just victims of sexual assault and put responsibility on the entire Fort Collins community.

“We need to empower the bystander,” Campana said. “If you see something that is inappropriate, step in and do something. We’ve all been in situations that were awkward, when you saw that something was going on but didn’t think it was your business. It is your business. This is your community, and you should step up and intervene.”