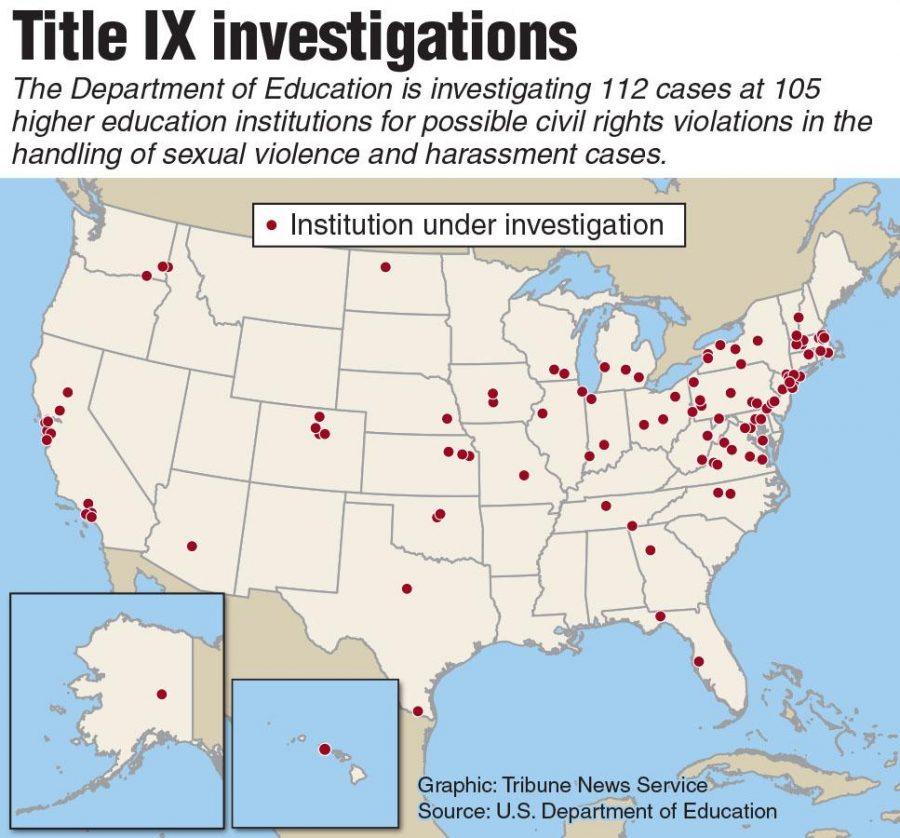 WASHINGTON — For the last four years, a little-known civil rights office in the U.S. Department of Education has forced far-reaching changes in how the nation’s colleges and universities police, prosecute and punish sexual assaults on campus.

With a strong mandate from President Barack Obama and Vice President Joe Biden, the office’s lawyers have redefined campus sexual assault as a federal civil rights issue, changed the standard by which allegations must be judged and publicized the names of a growing number of schools under investigation for allegedly failing to respond properly to complaints of sexual misconduct.

“This is the first administration to call sexual violence a civil rights issue,” said Catherine E. Lhamon, a former ACLU lawyer in Los Angeles who, as assistant secretary of Education, heads the Office for Civil Rights and has brought the style of an aggressive litigator to the once-staid education post.

“We don’t treat rape and sexual assault as seriously as we should,” she said, citing surveys that found one in five women say they were victims of sexual assault or unwanted sexual contact in college. There is “a need to push the country forward.”

Members of Congress and activists who fight unwanted sexual incidents on campus have praised the effort. College administrators grudgingly admit that the ratcheting up of pressure has changed a status quo in which some schools allowed perpetrators to go unpunished while failing to provide safety or support for victims.

But what some faculty, administrators and judges call an unyielding and one-sided approach by the government has provoked a backlash. Two weeks ago, a judge in San Diego rebuked the University of California campus there for trampling the rights of an accused student.

“Some schools see OCR as a bully with enforcement powers,” said Terry W. Hartle, senior vice president at the American Council on Education, the lobby group for higher education.

“Universities are desperately trying to do the right thing, but these cases can be really difficult to resolve fairly. Often, you have two conflicting stories, no evidence, no witnesses and it’s all combined with substance abuse.”

University officials, many of whom will speak about the subject only on condition of anonymity, complain of heavy-handed pressure from Washington and a growing bureaucracy.

Janet Napolitano, president of the University of California and a former prosecutor and secretary of homeland security, warned in an article in the Yale Law & Policy Review published online this month that “a cottage industry is being created” on campuses dedicated to handling tasks that fall outside the expertise of colleges and universities.

“Rather than pushing institutions to become surrogates for the criminal justice system,” she said, policymakers should ask if “more work should be done to improve that system’s handling and prosecution of sexual assault cases.”

Under pressure from the Office for Civil Rights, campuses are rushing to set up a parallel legal system to investigate and rule upon murky encounters that often involve inebriated students. They must decide within 60 days whether it is “more likely than not” that an alleged perpetrator was guilty. And they make those decisions without many of the legal protections associated with a criminal trial.

The new procedures vary from school to school, but according to Harvard Law School professor Janet Halley and other critics, many do not allow the accused to know details of accusations against them, to question accusers or to have lawyers participate in hearings. Many also allow only limited appeals of rulings by a campus administrator or outside expert.

The punishments can be an expulsion and a permanent notation on a student’s transcript, potentially life-altering penalties.

Critics call those moves dangerous procedural short-circuits that have resulted in serious injustice.

“It’s tragic what the federal government has done,” said Elizabeth Bartholet, a civil rights activist and professor at Harvard Law School. “They are creating a backlash against the very cause they are fighting for.”

Bartholet and 27 other members of the Harvard Law faculty objected publicly in October to a new university policy on sexual harassment and violence, adopted in the face of an investigation by the Office for Civil Rights.

But Lhamon’s tough approach has won strong support, driven by accounts of mistreatment from assault survivors such as Dana Bolger, who graduated from Amherst College last year and co-founded a group to advocate for victims.

“On my campus alone, students who experienced sexual or dating violence were discouraged from reporting, denied counseling and academic accommodations and pressured to take time off,” Bolger said last month at a Senate committee hearing. “When I reported abuse to my school, I was told I should drop out, go home and take care of myself and return when my rapist graduated.”

Lhamon and her colleagues say campuses need to quickly investigate complaints of sexual violence and reach a “prompt and equitable resolution,” regardless of whether a crime has been reported to police. A student should not have to attend class or live in a college dormitory with a person who assaulted him or her during the often-lengthy period that a criminal investigation would take, they say.

Law professors at several universities have objected to the department’s insistence that campus officials judge sexual assault complaints based on the “preponderance of the evidence,” a legal standard that’s much easier to meet than the “beyond a reasonable doubt” employed in criminal cases.

Critics say that in many cases, particularly those in which both parties were drunk and there were no other witnesses, schools are being pressured to reach a conclusion where it is impossible to know the truth with any certainty.

“When the case is ambiguous, when the memories are clouded by alcohol consumption or time, we shouldn’t be punishing people,” said Halley, a self-described feminist once responsible for investigating such accusations at Stanford University.

“I’m afraid that’s what we are doing — we are over-correcting,” Halley said. “The procedures that are being adopted are taking us back to pre-Magna Carta, pre-due-process procedures.”