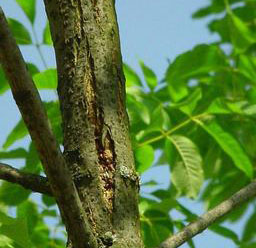 EABs are wood-boring insects that traveled to the United States from Asia, according to Colorado Forest Service Entomologist Dan West. It was first detected in the state of Colorado two years ago in Boulder. At first glance, EABs appear to be nothing more than emerald green beetles. However, EABs are highly destructive.

EABs are responsible for the death of over 100 million North American ash trees, according to CSU entomology professor Whitney Cranshaw.

“EAB is lethal to all species of ash trees that grow in North America,” Cranshaw said. “A tree will usually die within five years after it has initially been attacked if you don’t do anything about it.”

Cranshaw said EABs rank highly among the most deadly insects that have ever traveled to North America.

“EAB will profoundly and forever change North American ecology,” Cranshaw said. “Ash trees are functionally extinct. Every year, we find some new insect from Europe or Asia, and a couple of them have been bad, but this is by far the worst.”

EABs have not been detected in Fort Collins, but it is just a matter of time until the infestation spreads outside of Boulder County, said Cranshaw.

“There are about 900 ash trees on campus, and that’s a lot of trees,” Cranshaw said. “EAB will come to Fort Collins. You can count on it.”

West said EABs begin infestation by laying eggs on the outside of ash trees.

“Within 10 days, the eggs hatch and the larva develop in the bark over the course of a year,” West said. “The feeding and development of the larvae under the bark causes individual branches to die. As the infestation progresses, the tree will die.”

There are chemical treatments available for EAB-infested trees that are detected early on, said West.

“Some identifiable signs and symptoms of EAB are D-shaped exit holes that are 1/8″-wide, S-shaped tunnels under the bark, new sprouts on the lower portion of the tree or on large branches, vertical splitting on the bark and increased wood pecker activity,” West said.

West said students can prevent the spread of EABs by not moving firewood throughout the state, which will reduce the likelihood of new infestation.

CSU officials are aware of the problem and plan to combat EABs head on. CSU planter Fred Haberecht said actions are already being taken to save the trees.

“Currently, we are prohibiting the planting of ash trees on the campus to reduce our liability,” Haberecht said. “We are also systematically removing weak ash trees. If EAB does get closer to the University, we will begin to treat the large ash trees to prevent EAB and remove the young ash trees and replace them with a different species.”

Collegian Reporter Randi Mattox can be reached at news@collegian.com or on Twitter @randi_mattox.