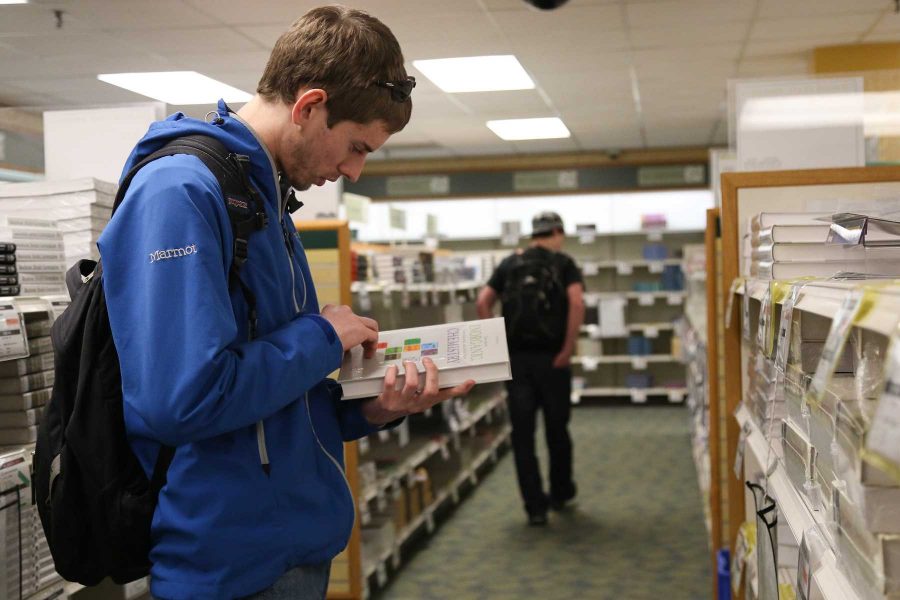 Junior Biology major Miles Eckley shops for books at the Lory Student Center bookstore Monday. With the rising cost of tuition and being a student in general, the university is working on a bill that will establish a tax holiday for all Colorado State university bookstores.

Students are getting more bang for their buck when they shop at the Colorado State University Bookstore.

Despite complaints about high textbook costs, the bookstore gives some of its funds to on-campus programs.

According to the bookstore’s director, John Parry, revenues from the CSU Bookstore go back to campus to support infrastructure and student services.

“The revenues generated by the bookstore go to several places in the LSC and on campus,” Parry said. “Any money we provide means that students pay less in student fees.”

The bookstore donates money to a variety of student and campus organizations, Parry said. Last year, the bookstore donated approximately $12,000 out of a marketing fund to various sources, including Ram Welcome, the College of Engineering, the Alumni Association and the CSU triathlon team.

“We try to be good community (members) and not only support CSU students but the CSU community, as well as the Fort Collins community,” Parry said.

According to Parry, the bookstore also supports local programs, such as CSU’s School is Cool program, which donates backpacks to K-12 students and local schools.

“We try to support Stove Prairie Elementary and some of the after-prom events of the local high schools because those are potential CSU students,” Parry said. “We want to make sure they’re thinking of CSU and the bookstore as an option.”

Despite the store’s involvement, some students around campus are unaware of what the store’s revenues are used for.

“That’s nice that they’re giving back,” said Kenna Fischer, a graduate student studying occupational therapy. “I guess it depends on how active I am in the student services they donate to because I’m a grad student and I’m not sure how much I would use them.”

Other students were less optimistic.

“That definitely makes me feel better that they donate to so many places on campus, but the issue is still there that the books are so expensive,” said John Glover, a junior zoology major.

Parry said the bookstore also makes efforts to support the student community through its pricing and partnering with other on-campus organizations.

“We try to make sure that our prices are as comparable as possible,” Parry said. “We are very aggressive at getting materials into students’ hands at the lowest prices.”

According to Parry, the bookstore offers many resources to students, including an online price comparison tool that compares CSU Bookstore prices to those of online vendors. Additionally, Parry said the CSU Bookstore has ranked well nationally in a number of categories for its efficiency.

“We ranked eighth out of 73 schools in the Independent College Bookstore Association’s ranking for general return on investment,” Parry said. “We also have one of the lowest personnel expense percentages of any of the college stores at 10.6 percent.”

In terms of personnel, Parry said the bookstore staff is primarily comprised by students. The store employs 23 full-time employees and over 75 students on part-time staff.

“The ICBA has awarded us Best Overall Performance twice,” Parry said, “We pride ourselves on our efficiency.”

Though the bookstore may be more efficient compared to other universities’ stores, their initiatives are not well known around campus.

“I’ve definitely found the bookstore to be cheaper than other places, but if they’re openly giving back to students, then why isn’t it that a public thing?” said Madison Gruber, a junior political science major.

Collegian Reporter Sean Kennedy can be reached at news@collegian.com or on Twitter @seanskenn.