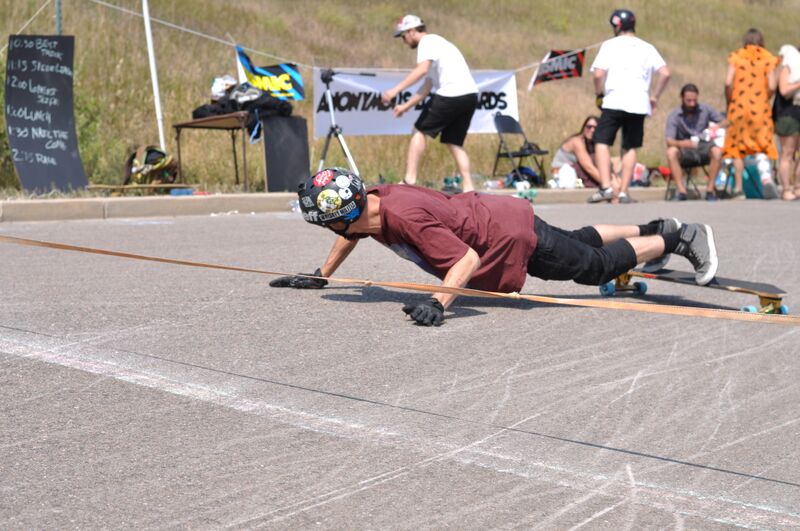 Anonymous Longboards hosted the second annual Fox Hills Slide Jam Saturday to foster local support for the longboarding community and connect riders with each other through a sanctioned riding experience. All 26 competitors tore down the street during the Best Trick, Slide Limbo and Nail the Cone contests.

“It blows my mind, their ambition and how talented these guys are,” Martin said. “They can pull 60-foot slides. They’re crazy. I wouldn’t do that. These guys go 50 mph. They’re nuts.”

Prizes for the non-profit Slide Jam were donated by 15 longboard-related manufacturers in the U.S., some of which were local. According to Martin, this competition is an opportunity for longboarders to connect as a community in a sanctioned area.

“The goal for the event today is to provide a nice opportunity for kids to go out and skate,” Martin said. “I mean, these guys skate all the time. They hit this hill and other hills all the time, and a lot of roads are illegal to ride on because you can get pulled over and get tickets. It’s also very dangerous because you’ve got cars going up and down.”

Luther Lane was closed down, and Anonymous Longboards obtained a special events permit from the City of Fort Collins for this event.

“Some spots you’ve got to get in, take a run and get out and it’s hard because you’re not trying to come in and cause a scene but a lot of people think you are,” Liam Angus said, a competition participant. “So you just want to get in, get out and be respectful.”

Anonymous Longboards was created when Martin turned his passion for making longboards into a business.

“I like making things,” Martin said. “I went to CSU, studied engineering and started making longboards again for myself. Before you know it, we started selling and took on a bunch of partners. It went up and went down and now it’s down to just me as a sole owner and we picked up a whole bunch of sales.”

Anonymous Longboards is a grassroots company that used social media to build a team of international riders that help promote their products through social media.

Evan Li, from San Jose, California, connected with Anonymous Longboards through social media and applied to be a team rider in August 2013 when he was 16 years old.

“There are a ton of board companies out there, but I wasn’t familiar with any of them,” Li said. “Anonymous posts a lot of stuff and they’re really social. You’re able to get to know the company better and I saw it as a great opportunity to start small and try my luck.”

Li approached Martin in person with the idea for the Slide Jam last year.

“I came last year because I wanted to go check out the headquarters and spend time with (other longboarders), chill with them,” Li said. “And then, we decided to create an event to fill up one of our days with something we could all do and have fun and skate.”

Li and the other team riders give Anonymous Longboards feedback on their board prototypes, as well as advice for social media posts.

“(Longboarding has) been a pretty big impact in my life,” Li said. “When I came to the headquarters, I learned how a business works — a lot about photography and promoting through social media.”

Collegian Reporter Sierra Cymes can be reached at news@collegian.com or on Twitter @sierra_cymes.