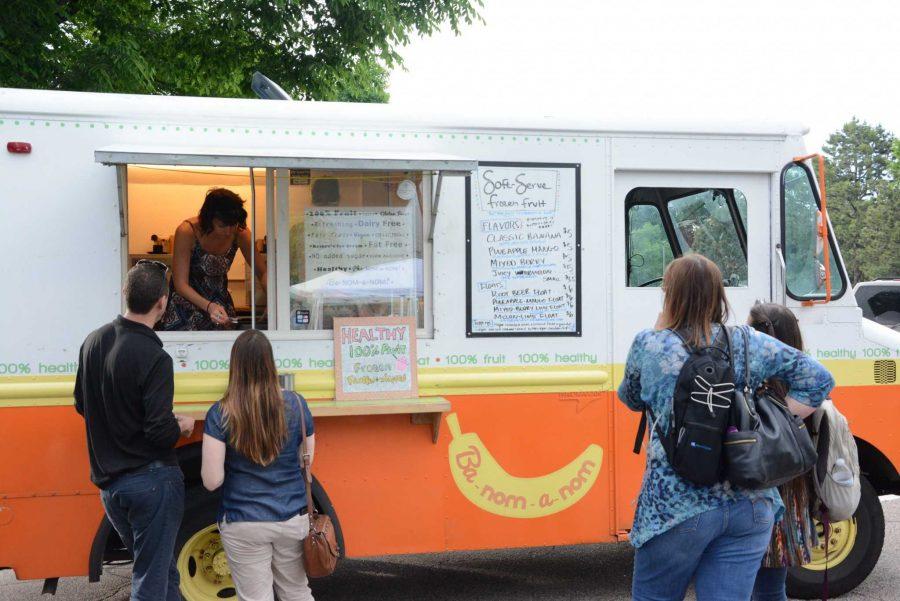 Hundreds of Fort Collins locals laid their blankets on the field, anxious to grab a bite or two to eat. Twelve food trucks gathered to showcase their selection of foods, and offered everything from 100 percent vegan cuisine to barbecue sauce-laden brisket, whose Worcester aromas wafted over the surrounding lawn.

The Fort Collins Food Truck Alliance organized a food truck rally from 5:30-8:30 p.m. Tuesday at City Park to give attendees the chance to eat out rather than in.

Food was not the only thing that brought locals to the park, though. Local musician Michael Kirkpatrick played original songs and covered bands such as the Grateful Dead to the field of people.

For children, there was a face painting booth and a balloon animal artist.

“It is the oldest and rarest camper in Colorado,” Smith said. “Finding this anywhere around the world is impossible, and we make food in it.”

The food truck rallies have allowed locals to learn about food truck dining options in their city, said Event Coordinator Sarah Ladley. While it has been going on for more than two years all across Fort Collins, this was only the second rally in City Park. Ladley said she wants to diversify the food trucks available at future rallies.

“It brings the community together,” said Blake Shepley, owner of Nomad Street Cuisine. “Families get to come out to enjoy unique food, listen to music and have a great night out.”

Shepley said he opened up Nomad Street Cuisine March 7, 2014, and has since traveled all across the United States, bringing his take on American cuisine with him from Florida to Texas.

“It’s harder, way harder, but it gives me more freedom,” Shepley said, comparing his previous life to his current one with Nomad Street Cuisine.

“Working in a restaurant, there’s always someone to pick up the slack,” McQuain said. “When you’re working for yourself, there are no sick days.”

McQuain said he created BIGS Meat Wagon after he took part in a barbecue competition and found that running a food truck was cheaper than running a brick-and-mortar restaurant. His food truck has been in operation for almost two years.

Ladley said she hopes the rallies can become more frequent and stable. Ladley also owns the Ba-Nom-a-Nom food truck, which creates 100 percent fruit soft serves with no dairy or additives, aside from toppings.

“The law said at a food truck rally, you could only have four trucks and it had to be on private property,” Ladley said. “Last year in the middle of the summer, the parks department gave us the OK to rent out the park, so this is still kind of experimental.”

Shepley said he prefers his new life as a food truck owner over his old one working in a stationary restaurant.

“There I walk into a restaurant,” Shepley said. “Here I build one.”

Collegian Reporter Erik Petrovich can be reached at letters@collegian.com and on Twitter @EAPetrovich.