Board of Governors approves $18.5M addition to stadium 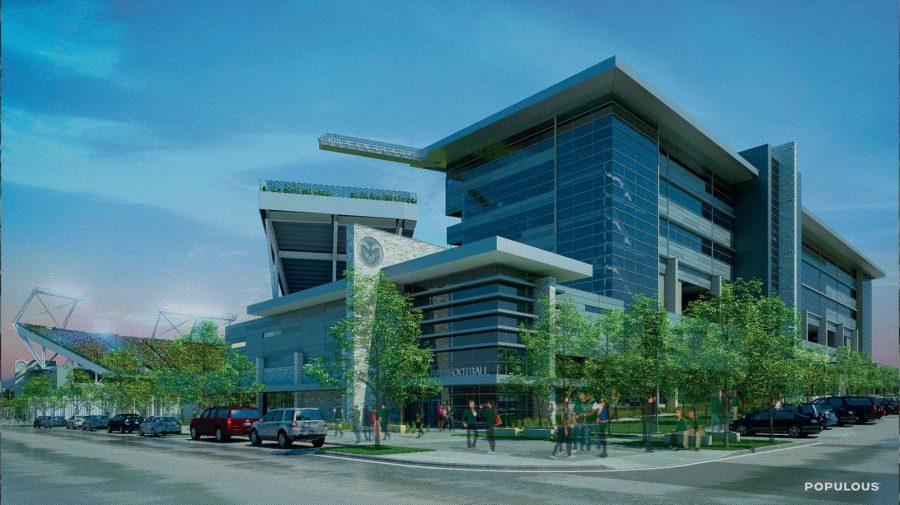 An updated rendering of the on-campus CSU stadium. (Photo courtesy of Populous.)

An $18.5 million project for an alumni and academic addition to the on-campus stadium was approved Friday by the Colorado State University System Board of Governors. Financing for this bond package is separate from the original $220 million for stadium construction.

The $18.5 million is included in the $180.4 million bond sale that that will be financing the new health center, new biology building, relocation of the Plant Environmental Research Center and additional parking spaces. The new PERC greenhouses will open summer 2015, and construction on the health center will begin fall 2015.

The alumni center and academic facility will be located on the east side of the stadium, totaling 82,000 square feet. A total of 20,900 square feet will be constructed for classroom space, and eight classrooms will be included.

The CSU Alumni Association will be financing the alumni center, which is expected to cost $5 million. Education and general fund money, coming from student fees, will service debt payments on the academic facility. Tony Frank estimates that repayment toward the academic portion will cost about $850,000 annually.

Advising offices currently located in Aylesworth Hall and the Institute for Teaching and Learning (TILT) will be relocated to the the stadium site. The Center for Advising and Student Achievement (CASA) will be moved there as well.

The new stadium is expected to be completed in time for the fall 2017 football season with a capacity of 40,000 people. It will be located on the corner of Meridian Avenue and West Lake Street.

Collegian Reporter Christina Vessa can be reached online at news@collegian.com or on Twitter at @chrissyvessa.