Classroom Press with Jess: getting social with SOC100 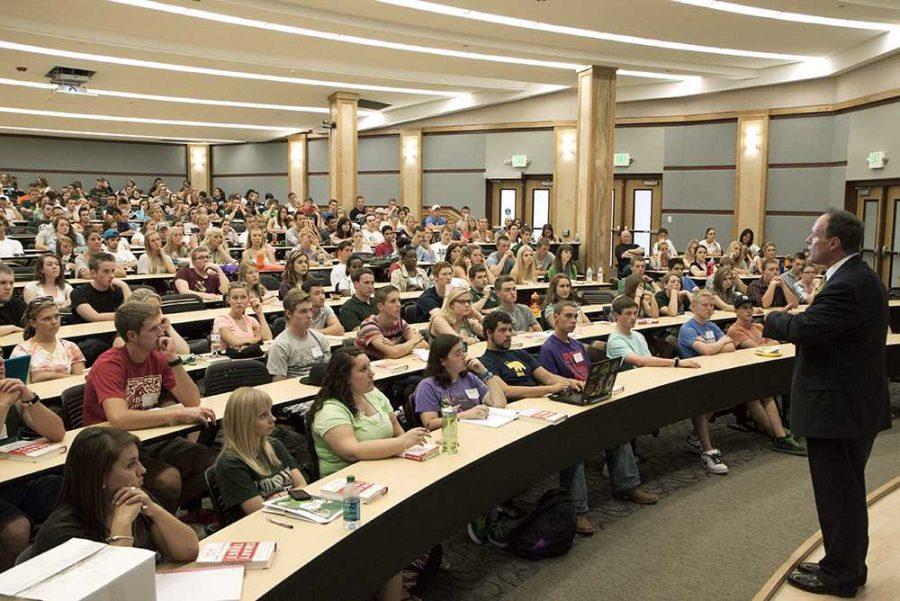 This week on Classroom Press with Jess, I got social and caught a glimpse of what goes on inside the doors of SOC100 – General Sociology, taught by Jason Downing. Lucy Robb, a freshman biochemistry student in the class, took me behind the scenes. Here, have a gander.

Sociology is the study of social behavior, focusing on its origin, development and organization. This class specifically weaves in an interactive element with projects requiring students to go into the community and conduct their own forms of research. In addition, the class discusses social movements and the importance of multicultural perspective in society today.

“My favorite part of the class was definitely the teacher because he’s not like any other professors I’ve had, and he’s in a band,” Robb said. “And, he likes the band Trampled by Turtles, which is awesome.”

Robb said her class learned about the role of sociology within the field of crime.

“We learned a lot about deviance and how everyone deviates in some way,” Robb said. “Deviance is any action or behavior we do that violates cultural norms, but the distinction between crimes and non-crimes is based off how severe the deviant action is.”

Robb offered some basic crime statistics categorized by gender, economic status and race that she learned from SOC100.

“I had never really looked at criminology from a sociological aspect before taking this course,” Robb said. “It offered a new perspective.”

Robb described how students of the course also studied gender stratification in society.

“Gender stratification is the unequal distribution of wealth or power between men and women,” Robb said. “We looked at how media has a huge influence on gender roles and how this influences what society thinks men and women should be defined as.”

General Sociology covers a broad spectrum of behaviors and movements, including feminism.

“On the other hand, we briefly discussed feminism, which is a movement to support equality for both women and men,” Robb said. “We talked about what it really means, that it’s not just a woman that doesn’t shave or something, which is what people think when they hear anything about feminism.”

Robb said the class discussed gender roles and the difference between gender, sex and gender identity from a non-biased perspective.

“We learned how identity applies to different people, which was helpful because I’d never really learned about it prior to the course,” Robb said. “Now I see how it is relevant in schools, media and on a global level.”

Gender roles change throughout time and across culture, according to Robb. The observed roles are continuously learned and relearned through social interactions.

“In schools, there is unspoken socialization into values and roles,” Robb said. “For example, history textbooks have more male figures and we tend to study more male figures in history than women figures, which is something I previously didn’t notice but became apparent once I took this course.”

Robb said her positive learning experience in SOC100 was due to her professor’s way of making seemingly boring information fun to learn.

“I really enjoyed the teaching style and information,” Robb said. “I never wanted to miss the class because I liked it so much.”

Collegian Reporter Jessie Trudell can be reached at news@collegian.com or on Twitter @JessieTrudell.