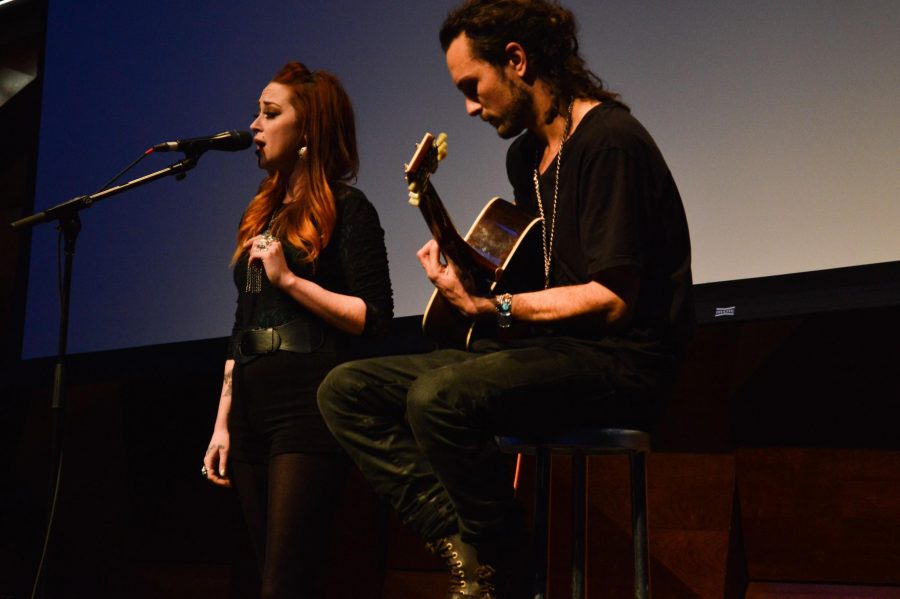 Yohe sang about her experiences.

To Write Love On Her Arms founder Jamie Tworkowski tells jokes to everyone in the room while his friend, Renee Yohe, practices her music set with a guitarist. This is how the two get ready to tell their personal story of self acceptance that grew into a movement.

Tworkowski came to CSU Friday to explain the TWLOHA cause. The free ASCSU event included original music by Yohe, the person who inspired the organization’s origin.

Yohe opened up with a set of songs she created to express her experiences.

“I spend a lot of time traveling the world telling a story that involves my friend, Renee,” Tworkowski said. “One thing that is really incredible about tonight is that she is here.”

Yohe introduced her set by expressing what inspired her music.

“Sometimes our process isn’t perfect,” Yohe said. “Sometimes people are able to walk through that with us and there are times where they may have to distance themselves, in a healthy way.”

Renee hoped that people could take away a sense of hope from her message. She felt that she could best express this through performing her own music at the event.

“All of (my songs) are written from experience,” Yohe said. “That is how I translate my message.”

Renee’s message was about expressing individual identity throughout life.

“You would want to experience (life) in the most loving and wonderful and free way possible,” Yohe said. “That is to express who you are.”

Tworkowski started the speech by talking about how TWLOHA became an organization. It started in 2006 when Yohe had not been accepted to a treatment center for substance abuse.

He met her through a mutual friend and they initially spent five days getting to know each other.

“I remember not wanting to forget these conversations,” Tworkowski said. “I also wondered if other people could be touched by this story being told. … Maybe some good could come from that.”

“I felt like her life was filled with pain and yet she was this incredibly gifted, creative, beautiful girl,”  Tworkowski said. “I wanted to write a story about that.”

With Tworkowski’s connections to the band, Switchfoot, he was able to promote his MySpace page and sell T-shirts to help pay for Yohe’s treatment.

The page attracted a crowd of people to share their own similar stories. Tworkowski decided to quit his job to help these people by answering their messages individually and providing resources.

“As you can imagine, there was this whole range of emotion,” Tworkowski said. “The very next thing that came up was a ‘find help’ blog.”

Since the beginning, TWLOHA has since expanded to a world-known nonprofit organization. Each of the messages received through their media platforms is responded to individually.

According to Tworkowski, the people who got involved on the TWLOHA media pages started to create a community of support among themselves.

“People started to realize that somebody else had been there,” Tworkowski said. “Maybe this was stuff you were allowed to bring out into the open and be honest about. This accidental community started to happen.”