The Cube at Morgan Library becomes the “Hot Box” 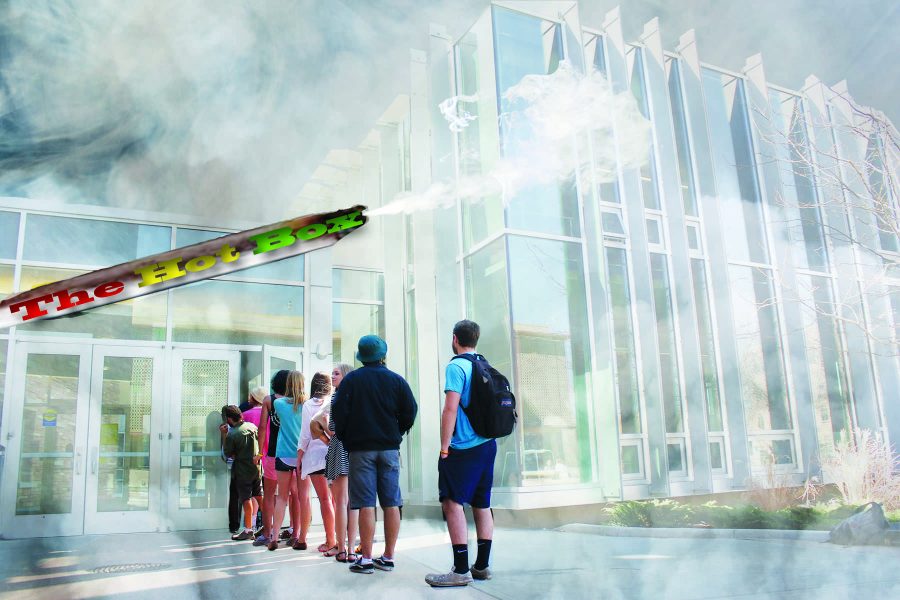 Students patiently wait in the engulfing cloud of smoke that surrounds the new Hot Box establishment at all times. Though some are skeptical about someone getting a contact-high, one student in line was heard saying, "I'm high as hell and I'm like 40 feet away from the door." (Photo credit: Abbie Parr)

Note: this article is satirical.

To promote higher learning, CSU’s administration officially announced the transforming of the Cube into the “Hot Box.” Instead of an outlet for 24-hour studying, the Hot Box will be a place to kick back and roast a couple bowls throughout the day.

“Usually, I’m in the Cube stressing over assignments, but now I just stress about how much money I have to blaze up,” said sophomore biology major Lars “Stoney” Osunnam.

With Colorado’s recent legalization of recreational marijuana and CSU’s uncanny attraction to wealth, the new Hot Box is the ultimate way to make money while also helping students learn. Of course, students will still be able to study in the establishment, but only if their gaze can reach past a wall of smoke and haze.

“I really like the fact that I can’t see anything through the smoke unless I truly concentrate,” said Sammuel Kray, senior horticulture major. “I try a lot harder to understand the material for class when I’m there. Plus, when I’m really f***ing high, my plant studies blow my mind, and that’s pretty cool.”

Along with offering all-night smoke sessions, the Hot Box will also be offering what their employees are claiming is the state’s largest in-store joint for purchase.

“It’s so sick, bruh. We’re calling it the ‘Monsta-Blaza-Ganja-Danga’ and it’s the length of my entire head,” said, Hot Box cashier, Luca “Can’t find my keys” Lebstien. “I can’t finish the whole thing by myself, honestly. I get a third of the way through and I’m all like, ‘Dude…’”

Reactions from both the community and the Fort Collins police force have revealed negative and positive notions. Some believe that the educational environment will suffer. Others are just angry that the only marijuana bar in the city is the Hot Box and it’s the axis mundi of Fort Collins.

“When I really think about it, I get pretty mad,” said local delivery boy, Wallace Johnson O’Keef. “And then when I get high at the Hot Box, I’m not that mad. … Actually, I’m pretty pumped — pretty stoked to the max.”

Opposing O’Keef’s point of view is Jerry McPerry. Born in Fort Collins in 1947, the 68 year-old is completely against the Hot Box.

“It’s just not right. … Why the hell would you go and build a gettin’ high place on the campus. That’s just stupid as hell, and I don’t like it,” McPerry said.

Although the community is torn, the students are quite attracted to it and have openly voiced their opinion on the matter.

“I can honestly speak for every student when I say that we don’t give a s*** about what the community thinks. Like, no s***s at all,” Kray said. “None. Not even one. Zero.”

No matter how people feel, the Hot Box is up and running with smoke billowing out as the blunts are toked, the bongs are ripped and the dab rigs are torched.

“My schoolwork may suffer, but it’s totally worth it,” Ossunam said. “Hell, maybe I’ll just go major in dope sciences with a concentration in blunts and pinners.”

Collegian Photo Editor Rick Cookson wishes you a Happy April Fools’ Day. In the real world, he can be reached at rcookson@collegian.com.