Supporters gather on campus to honor those lost in Nepal 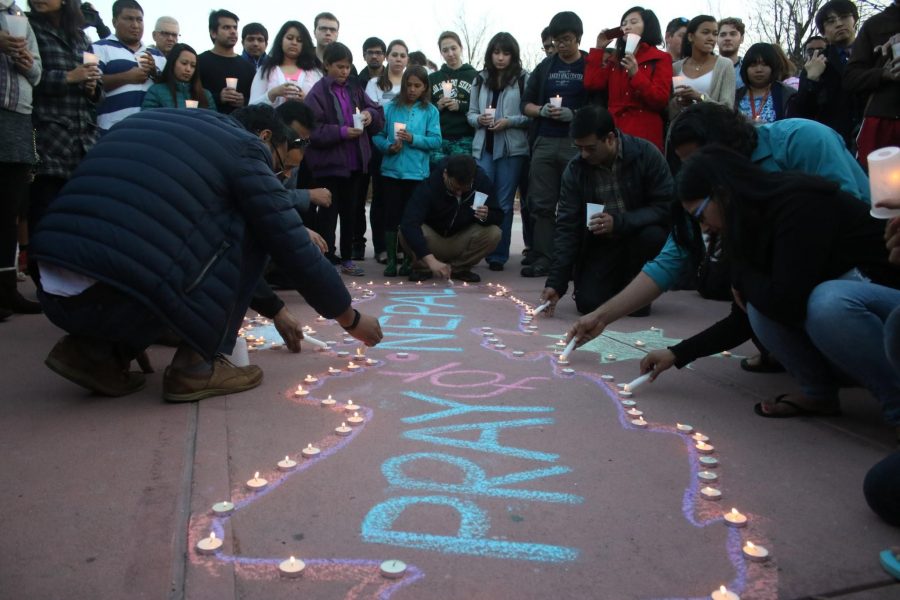 The Plaza, normally bustling with activity, fell silent Tuesday night to recognize the thousands affected by the 7.8 magnitude earthquake in Nepal.

About sixty people circled around the words, “Pray for Nepal” chalked on the Lory Student Center Plaza at Colorado State University for a candlelight vigil. The event was organized by the Nepali Student Association.

The area was lined with small white candles and the NSA also handed candles to those who attended the ceremony.

The president of NSA gave a speech about his homeland and the devastation the earthquake has caused, before asking God to show his beautiful country love at this time. This was then followed by a moment of silence that ended up lasting nearly five minutes. People there held hands, prayed and cried for Nepal.

Kait Evensen, a freshman studying art, attended the vigil and said she was very sad hearing the news of the earthquake and how much it is affecting the CSU community.

“I think students gain more of a sense of what is going around in the world (from the vigil),” Evensen said. “It’s easy on a college campus to be in your world of college, and not to think of what is going on around. I hope tonight’s service helped people see that and continue to pray for Nepal. ”

CSU president Tony Frank sent an email to the University stressing the support Nepal needs at this time of crisis and how close to home this tragedy resonates with students from Nepal.

“I knew my parents and relatives were in great trouble in Nepal,” said Abhinaya Subedi, president of NSA. “I couldn’t explain the feeling I felt when I heard about the earthquake. I don’t know about everybody, but thankfully my close family and friends are okay.”

Ram Gurung the secretary of NSA said he found out about the earthquake around 3:00 a.m. Saturday when his friend called him to break the news.

“When I heard about the earthquake I was so shocked and sad,” Gurung said. “It has been really hard to watch the news seeing videos from my homeland that is now destroyed.”

Joe Tiner, a junior studying journalism, said when he first heard about the initial death count was at a thousand, he knew the death toll could rise.

“When I first heard about the earthquake I felt saddened for the people of Nepal,” Tiner said. “(I am) so sad for not only the death, but also the destruction.”

According to Subedi about 5,000 people in Nepal have died, with thousands more injured and without food, water or shelter.

He said students can donate through UNICEF or the Red Cross, and urged supporters to continue to pray for the safety of everyone in Nepal.

CTV Producer Brynn Carman spent a month volunteering in Nepal, and can be reached at news@collegian.com and on Twitter @brynncarmantv.