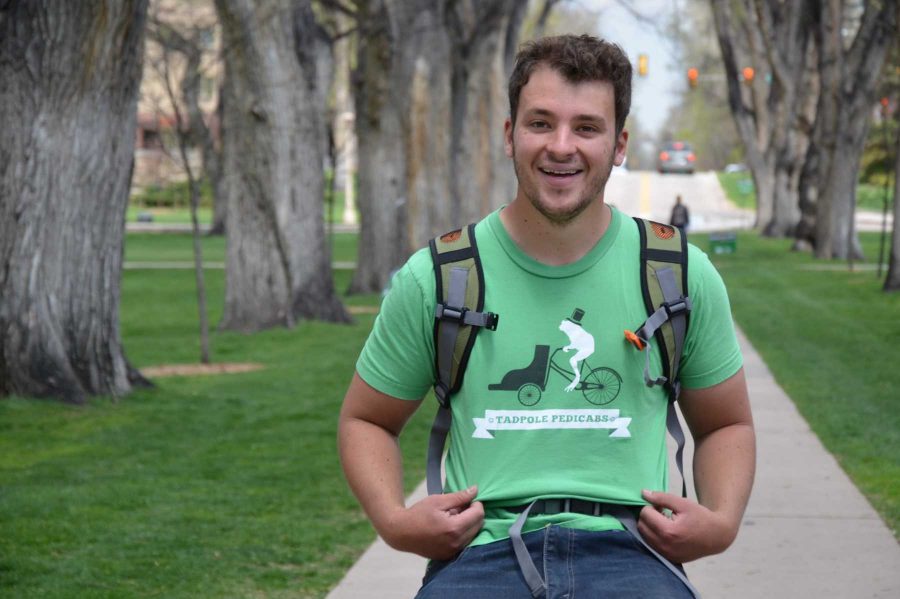 CSU graduate Kevin Kruglat takes a little break from giving students free rides around campus to take a few photos in the Oval on Thursday. Kruglat and his business partner recently started the business called Tadpole Pedicabs. The name is insprired by the tadpole style pedicab that puts the rider in front of the driver.

Thanks to a service that peddles bar-crawlers home, finding a ride home on the weekend is now easier.

Tadpole Pedicab service was officially launched at the end of March, offering rides within a three-mile radius to community members.

Andrew Victora, co-founder of Tadpole Pedicabs, said the service is all tip-based so there is no set fee.

“We want to promote bike safety and sober driving,” Victora said. “We want a streamline service that allows people to enjoy themselves, but to still get home safely.”

Victora and co-founder Kevin Kruglet, both CSU alumni, developed the idea at Colorado State University through the Venture Accelerator program. It is a program designed to advise entrepreneurs in the process of starting a business.

Student teams start with a 16-week program, the immersion lab, to plan and test their proposal. From there select teams are invited to move into the start-up springboard where they launch their businesses.

“You pitch a business idea and if they like it you’re emitted into this program and they give you some start up money, and they help you turn an idea into reality, basically,” Kruglet said.

They are currently operating with one pedicab, the second will be ready for use next week and a third is scheduled to be complete by the end of summer.

Beginning summer 2015, a brewery shuttle and campus tours will also be offered.

Tadpole Pedicabs is working with the CSU admissions office to spread the word that these tours are being offered.

“What’s cool is since it’s only a parent, and a student and a tour guide it can be completely customizable,” Kruglet said. “So if you’re really just like ‘I don’t want to see Old Town, we’ve seen it before. Let’s go see the stadium,’ we can go see the stadium, that’s no problem.”

Michael Wolff, a sophomore at CSU studying business administration, said the service will be good for the college community.

“I think it’s a spectacular idea, because it is a free service that runs off of tips,” Wolff said. “It’s a great benefit to our college community, because it is a fun and creative way to get around the streets.”