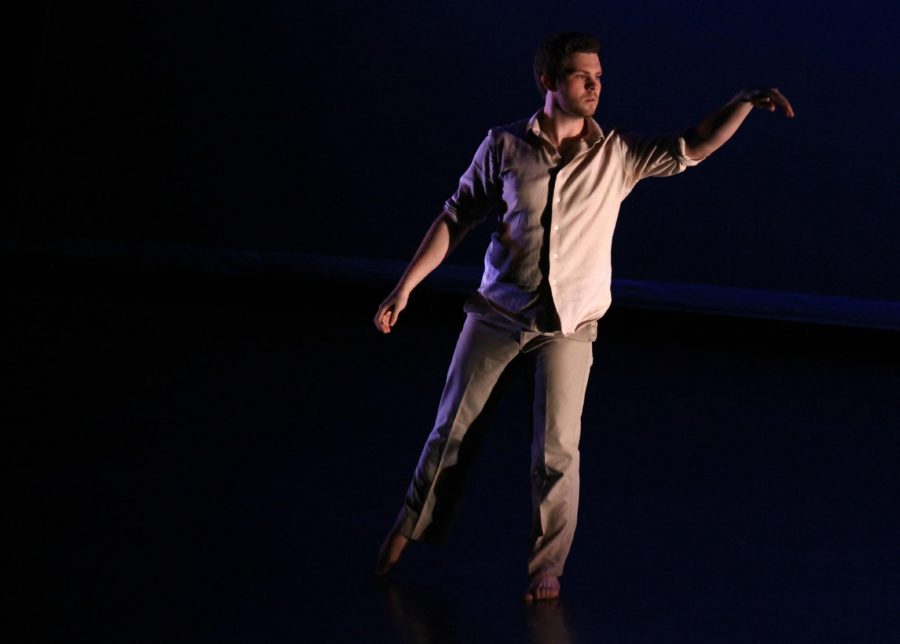 Devon Despain performs his dance, "Creation," which he choreographed to the music "Clair de Lune."

He was born in Taiwan, he dances in France and teaches choreography in Cambodia, France and Nepal, and he performed at Colorado State University’s annual Spring Dance Concert Friday and Saturday.

International dance performer and choreographer Hsin-Yu Kao was a special guest at the concert, which featured choreographed works of CSU’s dance majors and faculty.

Kao currently dances with Compagnie Käfig in France and choreographs for multiple dance programs at educational institutions in Taiwan, according to CSU’s dance department.

Kao has been working and collaborating in choreography and dance with CSU’s dance majors since March 23.

“He was one of the nicest people, and being able to be taught by him has been an honor,” said Shannon Henderson, a junior dance and journalism double major at CSU. “He truly is an inspiration and such a wonderful dancer. The dance department has been very lucky to have him.”

Having been performing since she was four years old, coming to college did not halt Henderson’s dance experience.

“Performing is why a person dances — we get to show who we are through movement,” Henderson said. “It’s just really an indescribable feeling.”

“Rehearsals are hard work, but so fun and rewarding,” Woods said. “It’s an amazing feeling to work so much on something, and then put it all onto the stage for everyone to see.”

Mike Solo, the publicity and marketing manager at the University Center for the Arts, said that the Spring Dance Concert has been held at the UCA since 2004, and is a chance for the dance department to showcase their work.

“This is a performance-based learning department, so everything is geared towards doing performances,” Solo said. “There are a lot of academics and prep work that we do and performances are just the icing on the cake.”

CSU’s dance department will host their annual Dance Major Capstone performance May 1 and May 2. More information about the performance can be found on the UCA ticket website.

Collegian Reporter Amanda Thompson can be reached at news@collegian.com or on Twitter @amanduhh3003.