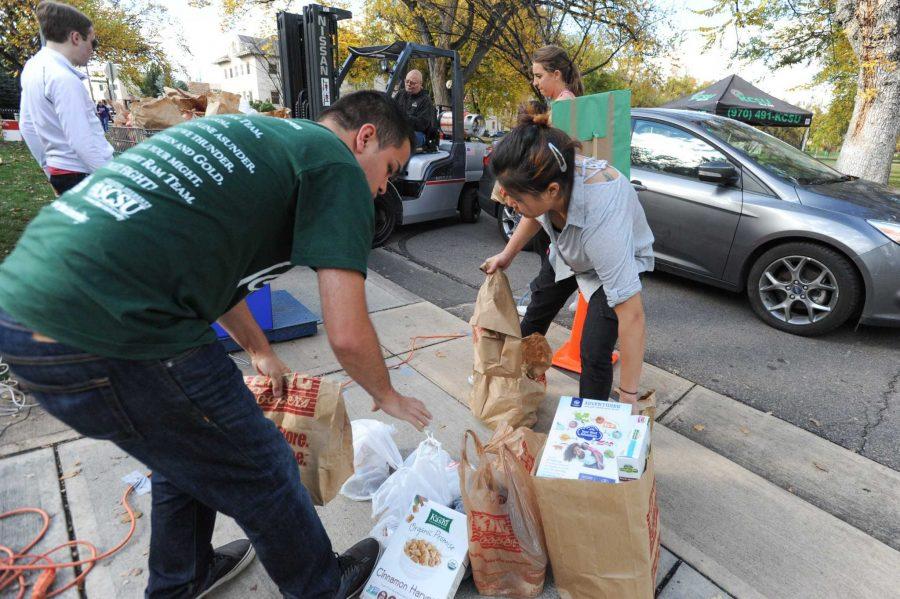 Students volunteer on Wednesday for Cans Around the Oval in an effort to fight hunger in Larimer County. Photo by Cisco Mora

Together, students volunteered for over 9,000 hours Saturday.

Students worked at local schools, planted trees, visited senior citizens and participated in numerous other activities. Students were able to sign up individually or in groups.

“It was nice to see (the community members) see CSU in a different atmosphere,” Willis said. “Instead of thinking about a block party that ruined our name as a community, we were able to give back to people that were very appreciative.”

While this was her first time participating with CSUnity, Willis said the experience was rewarding.

“What was challenging more personally for me was realizing how … close minded I’ve been to just our community,” Willis said. “I’m not just a Ram. I’m more of a Ram in the Fort Collins community.”

Sophomore animal sciences major Elaine Ptaskiewicz volunteered with about 50 of her sorority sisters. The Delta Delta Delta group traveled to Loveland, where they packed goodie bags for elementary students.

“I was expecting to do dirty work that nobody wanted to do,” Ptaskiewicz said. “I hung out with girls from the house. We played music while stuffing the bags and just had a lot of fun.”

Lindsey Graham, a freshman international studies major, said that her sorority Kappa Kappa Gamma values volunteering with CSUnity. As a result, she said participation was mandatory.

“Greek life in general really values philanthropy and service,” Graham said. “Even though we have philanthropies that we support, we also really like to get involved and support our community. It was a great day to partner with the University and give back.”

She said that it was a good way to enable society members.

“It was a good way to help people out,” Graham said. “Especially for people that can’t do stuff like that on their own — like the manual labor that some of the people like the elderly can’t do.”

Willis said she hopes students will continue participating in CSUnity.

“Pulling weeds for four hours can be a highlight of (somebody’s) day,” Willis said. “One small act of kindness can do so much for someone.”