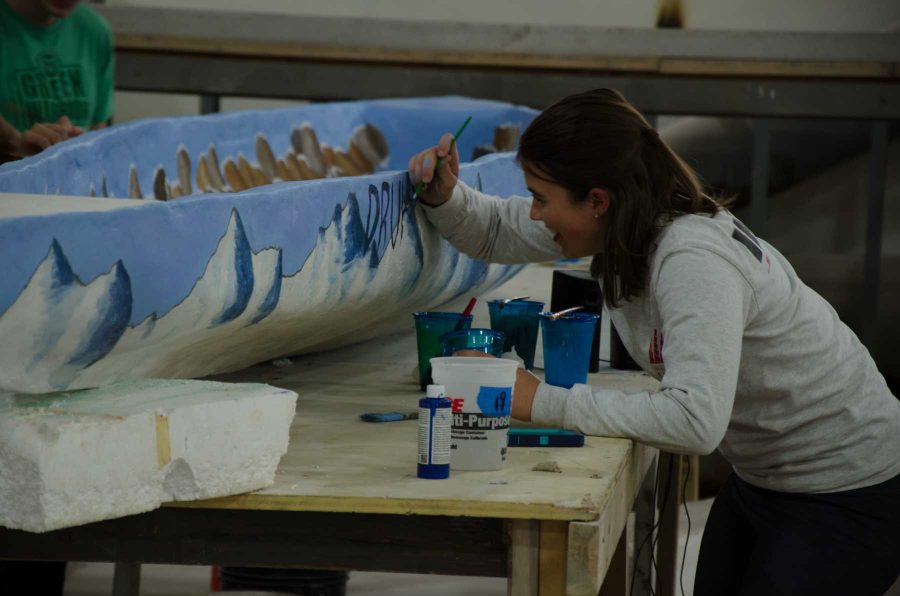 Covered in paint and silica, the Colorado State University’s concrete canoe team puts the finishing touches on their competition piece, “The Drumlin.” They will compete with the canoe at the University of New Mexico Saturday.

“It’s awesome to compete and have something to actually show for it,” said Jocelyn Bryant, one of five of the senior design team in charge of building and rowing of the canoe. “We’ve been working since September with almost 1,500 man hours put into it. We really hope to win.”

The competition is all part of the Rocky Mountain division and is sponsored by the American Society for Civil Engineers. The races include a co-ed sprint, an endurance slalom-style race, a men’s sprint and women’s sprint. There are also undergraduate students that wrote an 18 page design paper, some who worked on the canoe and some who will actually compete.

“I’ve been canoeing since I was young, so that part came naturally,” Bryant said. “We also practice at Horsetooth with the people who are specifically part of the competition side of the team.”

“Drumlin” means a rare canoe-like shape created by a receding glacier. The name, design and theme all have to do with glaciers and the effects that global warming have on them.

“We wanted a name that would pop,” Bryant said. “We wanted the canoe to pop, too.”

The canoe is made of specialized concrete that uses micro rebar and glass bead aggregate to reduce the weight of the concrete. It is 20 feet 9 inches long and weighs over 400 pounds. They earned the money for supplies through fundraising and donations, especially from the ASCE.

The rule book for the canoe alone is 88 pages long.

“There are rules for absolutely everything,” said Adam Balsiger, a senior design student. “You have to really be careful about how you build it, because you want it sturdy enough to not fall apart, but also light enough to float and turn fast.”

The last time CSU went to nationals was 2002. Rebecca Atadero, a professor in the Engineering department, was an undergraduate here at CSU.

“You meet so many people, and anyone who participates gets hands-on expertise of working out an entire engineering project,” Atadero said. “The ASCE likes seeing who’s involved and you get a lot of employment opportunities from it in the future.”

The team is confident in their placement this year.

“It definitely benefits the students more than anything else,” Balsiger said.“I think we have a pretty good chance at winning this season. The paper is a lot better than last years, and the concept of the canoe is more unique.”

Collegian Reporter Dallas Head can be reached at news@collegian.com.