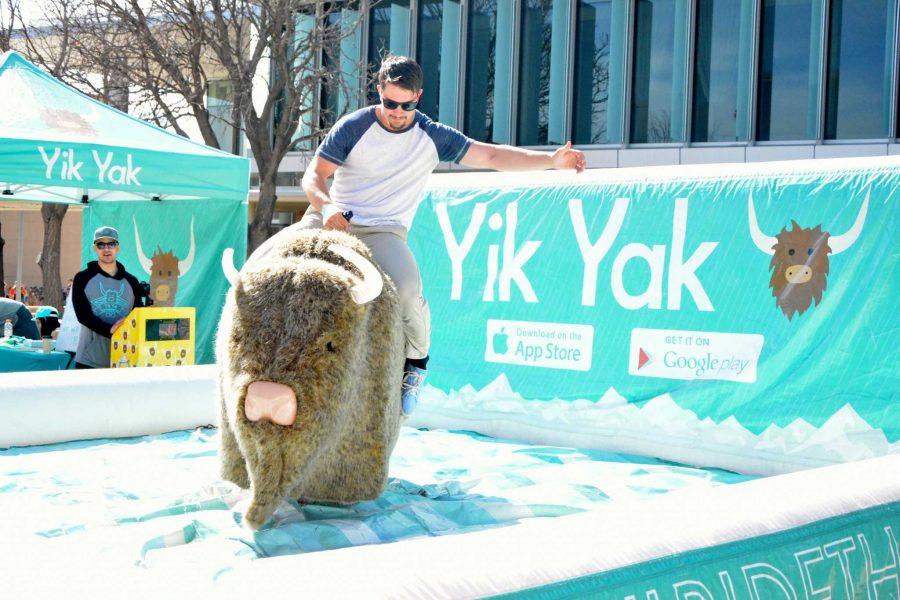 Students yaked on campus today about riding a yak to win yak-themed merchandise from the Yik Yak booth.

The anonymous communication app stopped at Colorado State University Wednesday and Thursday as part of its national tour, simultaneously raising money for CSU’s upcoming Body Acceptance Run Extravaganza. $1 was donated on behalf of each student that rode the mechanical yak or posted positive things about CSU on Yik Yak, according to a sign posted by the booth.

For staying on the yak for 25 seconds, students received sunglasses, and for 30 seconds, a t-shirt or socks, according to Hannah Dyer, a marketer on the Yik Yak tour. All participants received a koozie or a pen.

Sophomore biomedical science student Meredith Mann also wanted prizes and didn’t have enough “yakarma,” the participation scoring system on the app, to be able to win them, so she decided to try riding the mechanical yak.

“(I heard about it) on Facebook, and I saw the (booth),” Mann said. “I wanted some socks, but I don’t have enough yakarma.”

Others were less concerned about winning prizes, drawn primarily to the excitement of riding the mechanical yak.

This semester the app is stopping at a variety of universities for two days each, according to Yik Yak Field Marketing Associate Sean Maher.

“For this tour specifically, we’re really focusing on proper engagement on the app, promoting positivity … kind of to push them away from all of the negative uses that we’re currently experiencing on the app,” Maher said. “(CSU has) one of the more positive feeds that we’ve come across throughout the tour. … It’s definitely a feed that we want others to peek into and learn from in the way that students here interact with each other.”