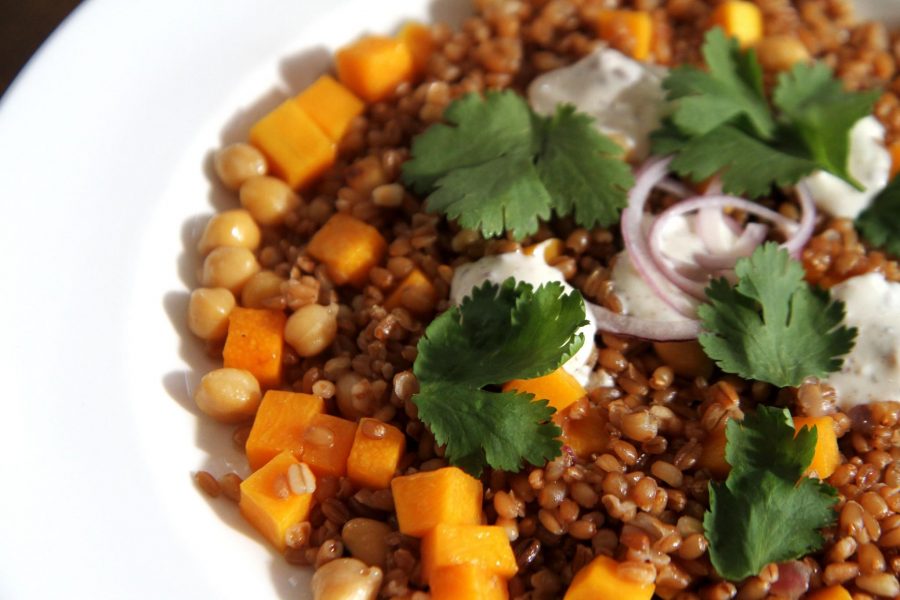 Wheatberries & Roasted Butternut Squash: one of three entree choices offered by The Kitchen on their special Great Plates menu. Great Plates is an event that not only provides three course dinners to those who normally cannot afford to go to dine at such restaurants, but also raises donations for the Larimer Country Food Bank. (Photo credit: Madison Brandt)

Every year from March 1 to March 14, over 36 restaurants and local businesses in downtown Fort Collins participate in an event known as the Great Plates of Downtown. The Great Plates is an event designed to raise money for the Larimer County Food Bank and promote local restaurants.

Great Plates was created by the Downtown Fort Collins Business Association, member businesses and the Larimer County Food Bank to help lower income residents. These organizations aim to help the 14 percent of Larimer County residents that live below or at the Federal Poverty Guidelines.

As part of Great Plates, customers are able to purchase dinner specials at $25 and breakfast specials for $2.50. When paying for the bill, customers are given the option of donating money to the Larimer County Food Bank. A donation of 25 cents provides a meal.

At some restaurants such as The Mainline, customers can donate without purchasing a meal, according to Ryan Cobb, a front house manager at The Mainline.

“We have a two for $25 deal, ” Cobb said. “A couple comes in and they have the choice of a soup or salad, an entree and a shareable dessert.”

According to the Great Plates menu at Jax Fish House & Oyster Bar, customers can have a three course meal for $25. The first course is either Lobster Bisque or a Fort Collins Salad. For a second course, customers have the choice of Blackened Fish, Cioppino or Smoked Chicken Jambalaya. For dessert, customers can choose either Chocolate Bread Pudding or Banana Crème Brûlée.

Cobb said the results of Great Plates was very positive.

“I think (Great Plates) is fantastic,” Cobb said. “It gives people who aren’t possibly aware of some of the restaurants in Fort Collins the ability to come down here and celebrate.”

Becca Midcap, a Colorado State University senior studying horticulture and acting manager for Ben & Jerry’s Scoop Shop, said for the event the store is offering a small milkshake of any flavor of ice cream for $2.50 or two scoops in a waffle cone for $2.50.

“For this part of the year, (Great Plates) is definitely helping out,” Midcap said.

According to the Down Town Fort Collins website, $53,000 was raised in donations through the Great Plates of Downtown in 2014.

Sandra Longton, the general manager of Coopersmith’s Pub & Brewing said the Great Plates has a positive effect on the community.

“It’s a great fundraiser and it gets people out and enjoying Old Town,” Longton said.

Collegian Reporter Matt Gindin can be reached at news@collegian.com or on Twitter @mgindin1.