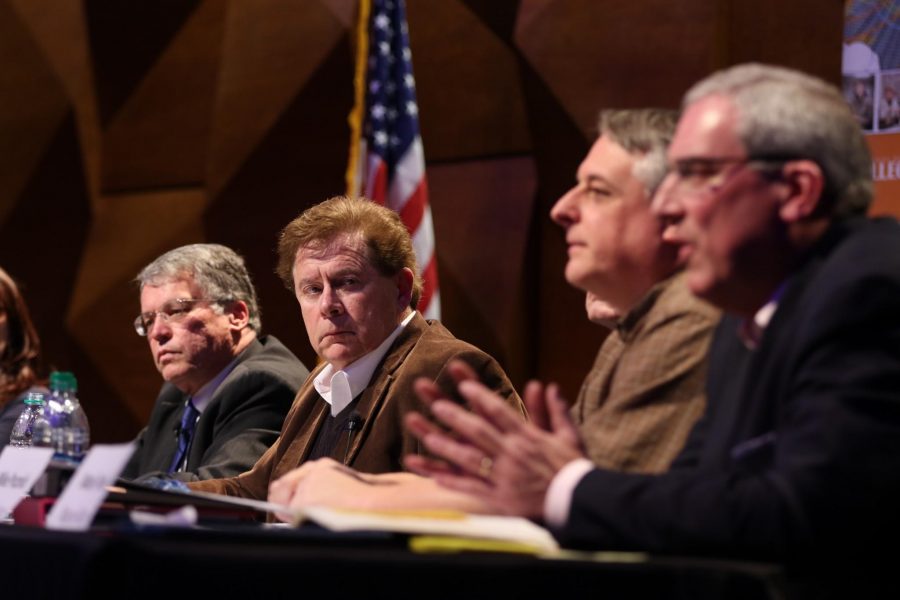 Fort Collins City Council and mayoral candidates debated Wednesday night in the Lory Student Theatre, addressing relevant topics including the stadium construction, the U + 2  ordinance and the abundance of traffic around town.

The event was hosted by the Coloradoan and CTV in preparation for the April 7 elections.

Candidates for district 2 are Ray Martinez and Nancy Tellez. The district 4 candidates are Eric Kronwall and Kristin Stephens, and the district 6 candidates are Gerry Horak and Carl Wangsvick. Council members will serve four year terms.
The city and CSU: Stadium construction
Horak spoke positively about the University’s relationship with the city.

“The current administration of Tony Frank has done a lot more than previous administrations (to talk with the city council),” Horak said.

However, Wangsvick was apprehensive about CSU’s decisions, especially in regards to the stadium.

“I suggest not a stadium, but more housing,” Wangsvick said. “They could house 3,000 more students.”

He said that the decision to build a new stadium is unfortunate.

“To fix the breaks (as a result of the stadium) requires new council and new leadership at CSU,” Wangsvick said. “This doesn’t look like an agreement other cities have made with other governments.”

Other candidates agreed with his sentiments.

“I think it’s pretty simple,” Luthi said. “We should stop the stadium.”

However, Horak said that CSU has agreed to pay for nearly all costs associated with building a stadium. He said that the city has been working on mitigations with CSU for two years.

“This is the first of series of agreements,” Horak said. “There has never been an intergovernmental agreement (with CSU).”
U + 2 ordinance
Martinez and Pruznick support changes to the U + 2 ordinance.

“The ordinance itself is pretty discriminatory, towards students in particular,” Martinez said.

Pruznick said that it does not serve the city’s purpose of upholding liberty. According to Luthi, the city must discover ways to allow four or more peaceful citizens, like the elderly population, to live together.

Tellez, Stephens, Horak, Troxell and Kronwall said that they agree with U + 2 in general. However, they noted that they would be open to discussion about specific aspects of it.

“We need to have a systematic enforcement of U +2,” Horak said. “(The enforcement should not) put a burden on individual homeowners.”

Wangsvick agreed that enforcement of U + 2 should be improved.

“I would also support a landlord code of responsibility,” Wangsvick said.
Traffic and Trains
Stephens said she hopes the city will construct an underpass to mitigate traffic caused by the trains.

“A lot of people in my district are concerned about getting someplace in an emergency because of the train,” Stephens said. “We need to look at some kind of underpass … so that we don’t have families that are waiting at train tracks during an emergency.”

She said that it could be constructed on a less busy street to mitigate costs. Despite this, Horak said that the city needs to carefully discuss building an underpass. He said that it would cost at least $3 million to complete it.

“There’s the idea of tolling,” Horak said. “That could probably pay for half of it.”

Wangsvick said that he eagerly supports the idea of an underpass, saying it is necessary for emergency situations.

“We do not need a conversation, we need an emergency underpass right now as soon as possible,” Wangsvick said.

Luthi said that the problem rests with population growth, something he says the city needs to carefully examine. Pruznick said that city needs to look into moving the trains in the long run.
Pay for parking in Old Town
Troxell said he would like to see one hour turnover parking downtown. However, Tellez expressed her disdain for parking payments along the streets in Old Town, saying that it would harm the atmosphere.

“I’d hate to see people decide not to go downtown because they don’t have the coins in their pocket to pay parking,” Tellez said.

Kronwall and Wangsvick said that they did not support it because of its negative effect on merchants. According to Wangsvick, merchants will move if they have to pay to park.

“What makes Fort Collins great is the variety of merchants,” Kronwall said.

Luthi was supportive of the plan.

“We’ll never maintain our equality if we don’t change our urban form,” Luthi said. “We’ve got to make Fort Collins for people, not for cars.”