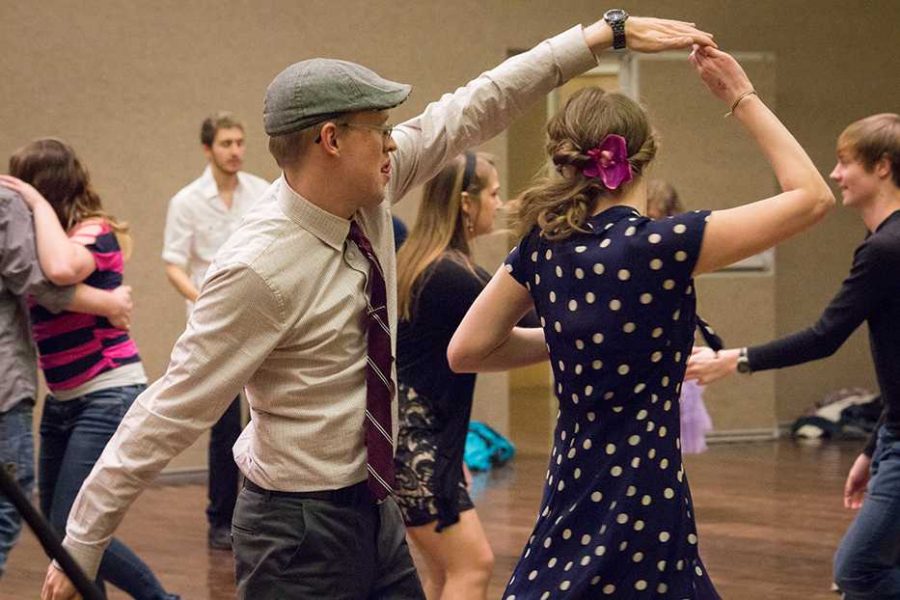 The 1993 film “Swing Kids” is about a group of rebel teenagers in Nazi Germany who listen to banned American swing music, which leads to an underground movement of dancing. Twenty years ago, the founder of the Colorado State Swing Society was inspired by the film to create the club.

The society celebrated its 20th anniversary with a large-scale social dance in the Lory Student Center Grand Ballroom Wednesday evening.

Attendees of the dance ranged from all backgrounds and experiences, with alumni, beginners, advanced dancers and performance troupes congregating in the ballroom. The anniversary dance featured live music from local jazz band In the Moment, who also performed at the grand opening of the LSC.

According to their website, the Swing Society was founded by the Jumpin’ JiveCats, a local swing performance group.

One of the original members and founder of the CSU Swing Society, Darrick Hildman, teaches dance and communication classes at Front Range Community College in Fort Collins. He also attributes the start of the Swing Society to seeing the movie “Swing Kids” in 1994, and the revival of swing dancing in the ’90s.

“Before that, I thought swing was for old people, but then we saw ‘Swing Kids‘ and saw that it was about being active,” Hildman said. “So we went out to Goodwill and bought suspenders and dressed up for dances.”

Without a set location for dancing, the Swing Society danced wherever there was space for them, which would sometimes be in Ammons Hall or in the hallways of the old LSC.

For the 100-percent student-led club, the 20th year mark signifies stability and a legacy of dancing.

“It’s really special and important for us because it signifies that we’ve been around long enough to keep the club afloat,” said Angela Huxel, president of the society. “I would love to see our club thrive for another 20 years.”

For many members, they feel a deep connection to the club, and joined with no dancing experience.

“I came here on a whim because I like jazz music, and I fell in love with dancing and all of the people here,” said Eric Mault, a sophomore business major who joined the society when he was a freshman. “I love the adrenaline (of dancing) and when you can barely keep up — that’s when it’s the best.”

The history of the swing society included large dances that would include close to 800 people dancing in the ballrooms of the old student center, and social dances every Wednesday — a tradition that continues today.

“What’s so fun about walking in here tonight is that so many things are different, and so many thing are exactly the same,” said Peggy Lyle, a self-described “adopted Ram” and original member of Jumpin’ JiveCats and CSU Swing Society. “I’m excited for the generations when I think about all the people who have been involved in the development of the society.”

The Swing Society sent over 60 formal invites to alumni and Fort Collins residents who frequented social dances in the past.

“It’s important to acknowledge all the people over the years who have worked hard to make the club what it is today,” Huxel said. “It’s about the old dancers but its also about the new dancers. They keep the club going.”