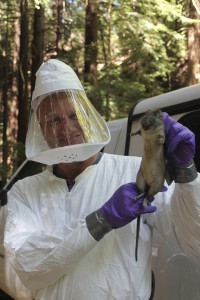 The bubonic plague typically conjures images of Medieval Europe, but research at CSU is bringing the Black Death to light, which still exists today in African mice.

In order to meet the growing demand for food in northern Africa, much of the native woodland forests have been converted into cultivated farmland. While the food supply is increasing, so is the risk of spreading plague.

The change in land use has led to an increase in rodent populations that carry plague, according to a study published in the American Journal of Tropical Medicine and Hygiene. Dan Salkeld, a research scientist in the Colorado State University biology department, is a co-author on the study.

As a disease ecologist, Salkeld studies zoonotic diseases, which are diseases that transmit from animals to humans. He has previously studied plague in prairie dogs in the Great Plains region and Lyme disease in California.

The interdisciplinary study examined how plague in this region was related to conservation, land use change, mammal ecology, plant ecology and public health, Salkeld said. In addition to CSU, researchers from the University of California-Santa Barbara, Stanford University, the Smithsonian and Tanzania’s Sokoine University of Agriculture came together for this study.

The team compared the prevalence of plague in rodents in conserved and agricultural lands in northern Tanzania. Populations of one mouse species, Mastomys natalensis, are very high in agricultural regions.

There can be up to a thousand cases of plague in Tanzania each year, but this number varies greatly. In 60 percent of cases, the disease is lethal when untreated, but it can be stopped with antibiotics.

They found that the abundance of mice carrying plague nearly doubled in the agricultural habitats. This trend directly relates to the change in land use, according to Salkeld.

“We had more numbers of those with more exposure to plague in cornfields, which would imply that when you change the ecosystem, you change your risk of diseases,” Salkeld said. “If I could come up with clear cut findings more often, then I’d be a much more famous biologist.”

Hillary Young, a community ecologist in the department of ecology, evolution, and marine biology at UC Santa Barbara, is also a co-author of the study. She said their research gave them the opportunity to “look at a system where human disturbance to ecosystems had very direct and tangible effects on human health.”

“I think identifying synergies for health and conservation is always exciting,” Young said.  “This relationship is far from universal, but there are many cases where such a pattern does emerge, and this is one.”

Because of the cooperative nature of the study, it was often challenging to understand the languages of different disciplines, according to Salkeld. The challenge was also what he found to be most rewarding.

“It was fantastic because you learn all these different approaches,” Salkeld said. “You learn all the weaknesses of things that you’ve done for 10 years of your own research.”

While people in this region probably won’t stop farming any time soon, they can be aware of their increased risk of contracting plague. From there, they can take steps to protect themselves, such as protecting their crops from pests and seeing a doctor when they become sick, according to Salkeld.

“One of the confounding issues is an increased risk of zoonotic disease,” Salkeld said. “So let’s try and think about that before it becomes an outbreak.”

Collegian Reporter Emily Vavra can be reached at news@collegian.com or on Twitter @vivalavavra.