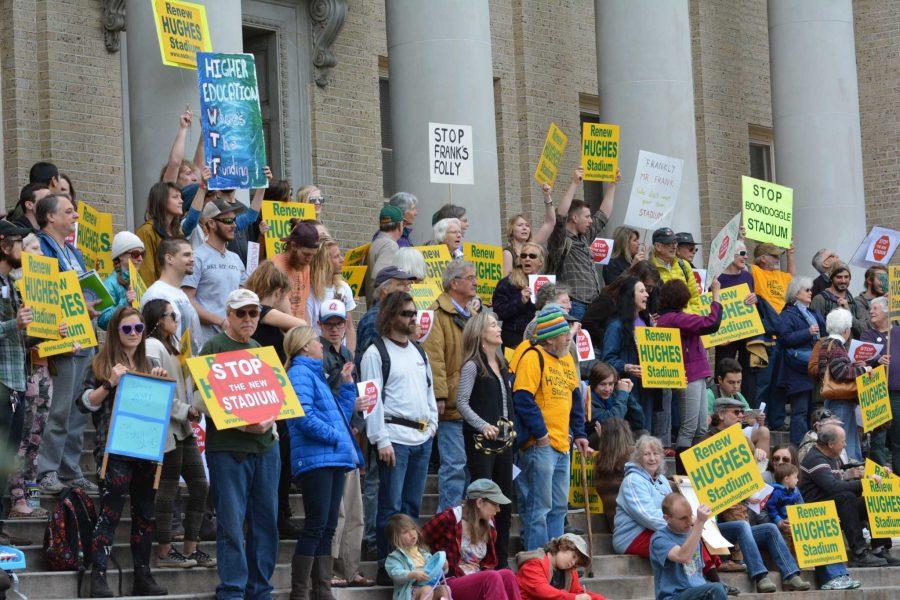 The beat of bongos echoed up the steps of Colorado State University’s Administration building Friday, paired with chants saying, “It’s our money,” “Tuition’s high enough,” “We want Tony fired” and “Stop the stadium.”

Groups of students, faculty, mayoral candidates and members of the Fort Collins community rallied together to protest the construction of the already-approved on-campus stadium at the Oval.

According to University representative Mike Hooker, President Tony Frank, “is traveling on University business and is out of town.”

For many in attendance, their concerns lie with sustainability, parking, traffic, trash, noise and funding.

“We’ve had numerous discussions, and heard from many people for and against the stadium over the last three years,” Hooker said in a e-mail to the Collegian. “We certainly support the rights of all to share their views – as we have throughout this process. The input we’ve received over time – both pro and con – will help make this an even better project.”

Some students, particularly those with a sustainability background, prefer to revitalize the already-existing stadium.

“As a sustainability major, I believe in revamping what we already have instead of building new,” said Tatum Bandim, sustainability student. “We already have a perfectly awesome stadium and a place that keeps the loud noise away from campus, where we’re suppose to be focused on studying.”

The actual building is only part of the problem, according to the protesters. The new stadium would not only displace existing greenhouses used by the Plant Environmental Research Center and Horticulture Club, among others, but it would also render the currently nutritious soil in the area useless.

“We’re going to tear up great soil where the greenhouses are currently, to pave it over, and put up a new cement mausoleum,” said Chanin Tila, ecosystem science and sustainability senior. “Soil gets degraded over time. You have to add to it. We’re a land-grant university. We’re here to take care of the land.”

The protest started small, with a few members of the community standing along the path leading to the Administration building. Soon the crowd grew to over a 100 in size, and together they marched towards Tony Frank’s office.

But even with the protest exceeding 100 participants, it was not enough and almost too late for Save Our Stadium member Dan Leatherman.

Leatherman started gathering signatures to prevent the new stadium in 2012. Lately he’s noticed a push with students to protest.

“It might be too late — that’s the irony in the whole thing,” Leatherman said. “The mass of citizens don’t get involved until it’s so close. They don’t look ahead. That’s another problem of getting mass protests. By the time you get people involved, it’s almost too late.”

Like many others, Leatherman began gathering signatures because of concerns regarding finances.

“If you borrow $220 million, it’s just like a mortgage on your house,” said Chris Marshall, community member and advocate against the stadium. “You get $220 million in loans, which you have to give back with interest over 30 years. So the interest will be through the roof.”

The $220 million bond will help pay for infrastructure updates not limited to the stadium, pending an intergovernmental agreement which Fort Collins City Council will vote on Tuesday.

Despite the cries from protesters for President Tony Frank to emerge from his office, he never did. But, for participants like student Anthony Crenshaw, every step matters.

“All you can do is try … just fight for what you believe in,” Crenshaw said.

Collegian Reporter Lawrence Lam can be reached at news@collegia.com and on Twitter @LawrenceKLam.