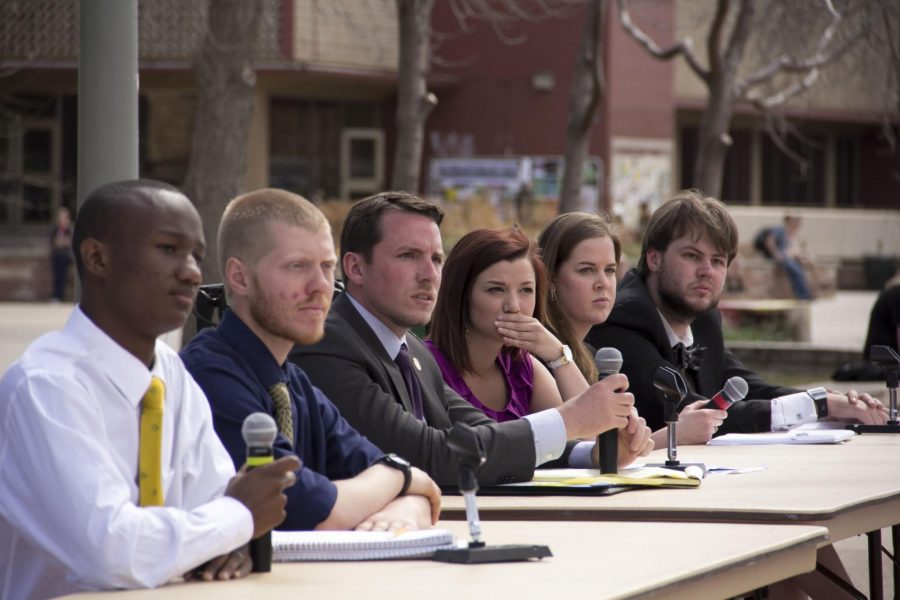 Candidates for ASCSU president and vice president discussed their visions for the upcoming year on the plaza Friday.

The candidates for presidency are Jason Sydoriak with Taylor Albaugh, Kwon Yearby with Clayton King and Lauren Wester with Filipp Dedogryuk.

The voting period will begin April 6 at 8 a.m. and will close April 8 at 4 p.m. Voting stations will be available in the Lory Student Center or the Morgan Library, and students can vote online at RamWeb.

Wester and Dedogryuk emphasized their desire for ASCSU members to be on the plaza, interacting with students and discussing ASCSU events. Wester also said that she wants to establish a student task force outside of ASCSU for students to share their ideas. Rather than bringing her own agenda, she plans to be a liaison between the administration and the student body.

“At the end of the day, it’s about the student, the individual,” Wester said. “I want to bring your concerns and your opinions on things. I don’t want it to be just me speaking.”

Sydoriak and Albaugh said they plan to use established institutions, like the Collegian, to communicate with students. Albaugh said that the Department of Outreach needs to continue reaching out to students.

“We need to maximize our resources first,” Sydoriak said. “Then we can recreate. … In the last years, student voices have been fragmented. There hasn’t been somebody who’s taken seriously, who has accomplished a lot, who has gone to Congress and passed legislation, to to sit at that table (with the administration) and actually get things done.”

Yearby cited his past experience on the Student Fee Review Board, where he questioned Tony Frank about construction. He plans to continue asking challenging questions, while also listening to the students.

Yearby said that all of his initiatives are financially possible. He said that he plans to reduce ASCSU student fees.

According to Sydoriak, students need a professional representative at the Student Fee Board. He said that he already has had conversations with members about maximizing student fees.

Wester said that the majority of her proposals do not have fees. Rather, they involve building relationships and improving transparency between the students and the administration.

Yearby said that, while on ASCSU, he established 16 diversity seats. According to his running mate, only two of those seats remain. Yearby said he will establish more of those seats. Additionally, the team expressed their frustration that student organizations rarely communicate. King said they would encourage connection between the groups.

Albaugh said, based on her past experiences as a resident assistant and orientation leader, diversity is an important issue to her. She has seen students come to the University from a variety of backgrounds.

Wester and Dedogryuk emphasized reaching out to international students. They also want to facilitate dialogue between religious and spiritual groups.

Dedogryuk said that he is shocked by the lack of knowledge most students have about ASCSU. He reiterated his desire to communicate with students on the Plaza.

Wester said, as parking spots are eliminated due to the stadium construction, ASCSU should communicate with students about where and how they can park. She said that awareness is key to prompt a smooth transition.

Dedogryuk said, because he uses buses to commute to and from campus, he understands the frustrations many students have regarding the Transfort system. He said he will attempt to improve bus times and frequency.

According to Sydoriak, the students need a liaison to discuss parking with the University. He said a serious, professional individual is needed to communicate with the administration effectively.

Sydoriak said he would like to establish a student task force to work with the city regarding transportation.

Yearby said he wrote the original ASCSU bill for the on-campus bus shuttle. He would like to improve Around the Horn by expanding its route to the south and west. He would also like to establish a late-night bus, so that students working on campus at night can use it to go home.