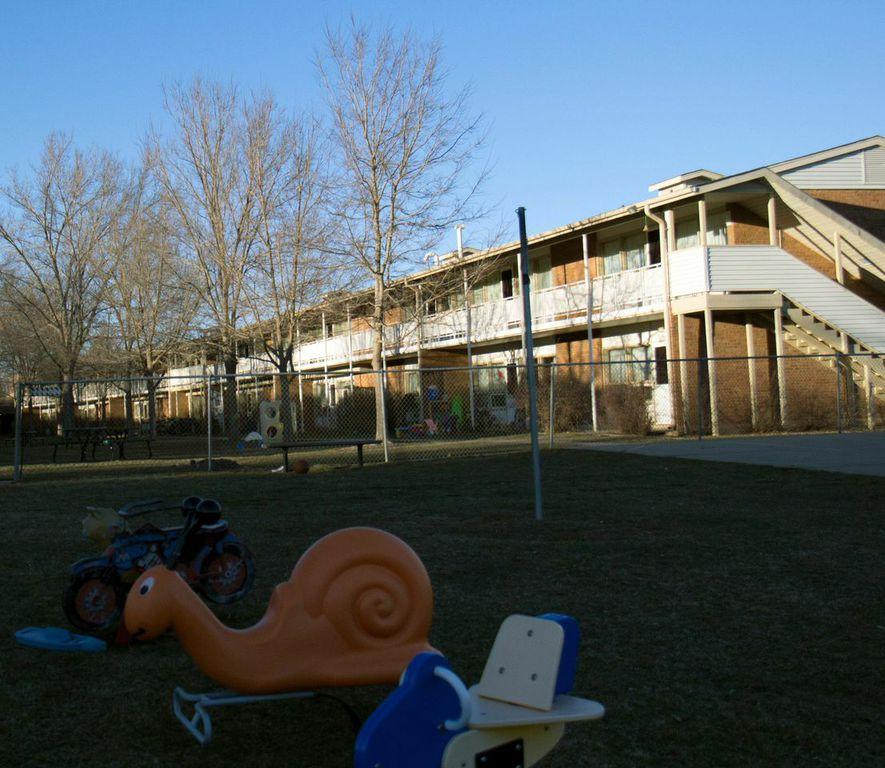 Children's toys sit outside the courtyard of Aggie Village South, a community that provides a home to international students and families. (Photo Credit: Kevin Olson)

Aggie Village provides a home for international students and their families just south of the Colorado State University main campus.

According to Apartment Life Manager Jeffrey Perkins, 74 percent of residents at Aggie Village are international.

“It’s a very unique place to live because we have a lot of folks from different countries,” Perkins said. “A lot of people tend to forget, but Aggie Village is a part of CSU — we fall under apartment life and housing and dining services.”

Aggie Village provides residents with programs to accommodate cultural, resource and education needs, such as ESL tutoring on Monday mornings.

Perkins said making residents feel comfortable through programs is a large part of what Aggie Village does. However, some some residents do not feel adequately supported, such as Mastafa Kabbani, a health and exercise science major and Saudi Arabian international student, according to his girlfriend, Isabel Bishop.

“I feel like they really don’t care about international students because every time Mastafa has gone (to management), they pretty much ignore him,” said Bishop, an Aggie Village resident and former CSU student. “The problem persists for a while, then finally they address it.”

Since Bishop and Kabbani moved to Aggie Village in August 2013, Bishop said they have experienced problems with pests, mold and flooding.

“When we first moved in, everything was super dirty,” Bishop said. “It’s molding, decrepit, disgusting and (the mold) smells. I don’t know how or why, but I think there is something in the piping that is going on.”

What Bishop and Kabbani have experienced is contrary to what the complex outlines as its general maintenance policies.

The University Apartment Handbook states that priority will be given to emergency repairs, those that would cause safety concerns for residents or severe damage to the apartment. Apartments are treated for pest control before new residents move in.

Many other residents, however, have found the apartments accommodating to their needs.

“After we arrived here, we were surprised at how comfortable it is for me and my family, including two children, really loved it,” said Ali Sharifi, a research associate at CSU. “It’s very economic, and it’s very safe.”

Sharifi said he appreciates the apartments for their convenient location and resources for children, such as the playground.

Rick Brandes, a research associate to farm manager at the CSU Foothills Campus, said he has not had a single problem living at Aggie Village for five years.

“The only thing, I had a spray nozzle on my kitchen sink break, and they came and fixed that,” Brandes said. “These guys are here within 24 hours usually. They come in once a year and do an apartment inspection, check the smoke detectors, check the fire extinguisher — it’s just a great deal.”

“They came in and looked at it. It worked for a day and then it went back. It has gotten worse from there, I can’t even get it to be hot for five minutes total,” Bishop said. She added that two weeks after the incident a new system was installed, but the temperature still fluctuates.

Susie Lautaimi, a senior business accounting major and Aggie resident, also experienced issues with her water temperature. However, Lautaimi said she has worked with maintenance and experienced a quick turnaround for repairs.

“With the shower, at first it went from extremely hot, then back to normal or too cold,” said Lautaimi, a senior business accounting major. “They came and changed the head.”

CSU Housing & Dining staff, including those who work at Aggie Village, are required to take five basic training courses, including “Customer Service: A Customer First Approach” and “Equal Access, Equal Opportunity: A Respectful Workplace Environment for Staff,” according to Tonie Miyamoto, director of communications for Housing & Dining Services.

However, additional courses are available and encouraged, including some that may help staff interact with international residents.

“Housing & Dining Services also offers more than 300 additional professional development and training courses per year that include topics specific to our diverse international student and staff population,” Miyamoto said in an e-mail to the Collegian. “We also offer culture-specific training for staff to share best practices for working with Middle Eastern students and Chinese students, our two largest international demographics in the apartments and residence halls on campus.”

Half of Aggie Village is currently being renovated. Aggie Village North, a $111 million renovation project to be completed by fall 2016, will replace 145 apartments constructed in 1960, according to the CSU Housing and Dining website.

Collegian Reporters Christina Vessa and Ellie Mulder can be reached at news@collegian.com or on twitter @chrissyvessa and @lemarie.