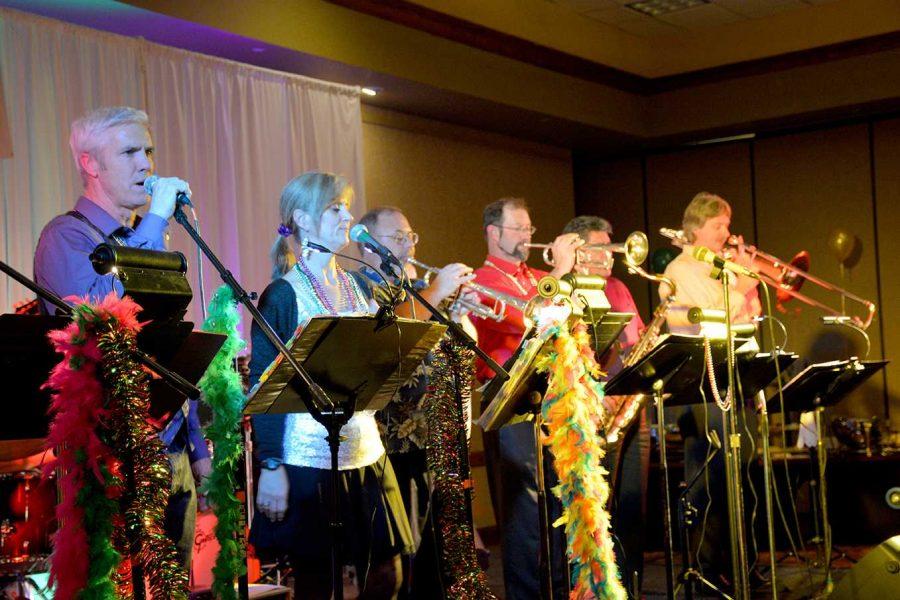 After the Fire performed for the third annual Geller Center benefit Mardi Gras party. The Geller Center is a nonprofit that provides a safe and inclusive spiritual center for CSU students. (Photo credit: Emma Brokaw)

Fort Collins community members joined the Geller Center in costumes for dancing and games Saturday. It was also a celebration of hard work, since the center recently paid off their building.

The third annual Mardi Gras fundraiser took place at the Hilton Hotel. The proceeds went to supporting programs organized by the center.

Peggy Christiansen, the executive director of the Geller Center, said the event was a fun way to celebrate a great deal of work.

“There is dancing to After The Fire, one of the greatest bands around, and they’ve been around for a long time,” Christiansen said. “We’ve got some games of chance, we have a cupcake auction and whoever finds the baby in the cupcake is going to get a free night at the Hilton.”

During the event, a silent auction and a costume contest were held. The winner took home a two-night stay at the Cheyenne Mountain Resort in Colorado Springs. All of the items in the silent auction were donated by local businesses.

Two of the live-in interns at the Geller Center helped organize the games, but they also wrote and performed a rap for the crowd.

Jordan Lavelle, one of the rappers and a senior at Colorado State University studying communications, said the fundraiser was a way to get the word out.

“We are raising awareness about what the Geller Center is,” Lavelle said. “It’s emphasis on fun and it’s really about celebrating the diversity that is throughout the human experience.”

Lavelle has lived at the Geller Center for over a year and said he found the support he needed to make it through a tough time.

“I had initially found out about this place through counseling because I was going through a really difficult time in my life and was needing support that I wasn’t finding elsewhere,” Lavelle said. “The first time I attended ‘Food for Thought,’ one of the gatherings that we host, it was perfect and it still is.”

For over 50 years, members of the Geller Center have been accepting people of all cultures and religions, providing them with a space for their spirits to grow.

“The Geller Center is a place that is safe for students at CSU and community members to explore who they are and what they want to do in the world,” Christiansen said.

Bob Geller founded the Geller Center in 1962 when he moved into the house where the center is still located today.

Collegian Reporter Veronica Baas can be reached at news@collegian.com or on Twitter at @vcbaas.