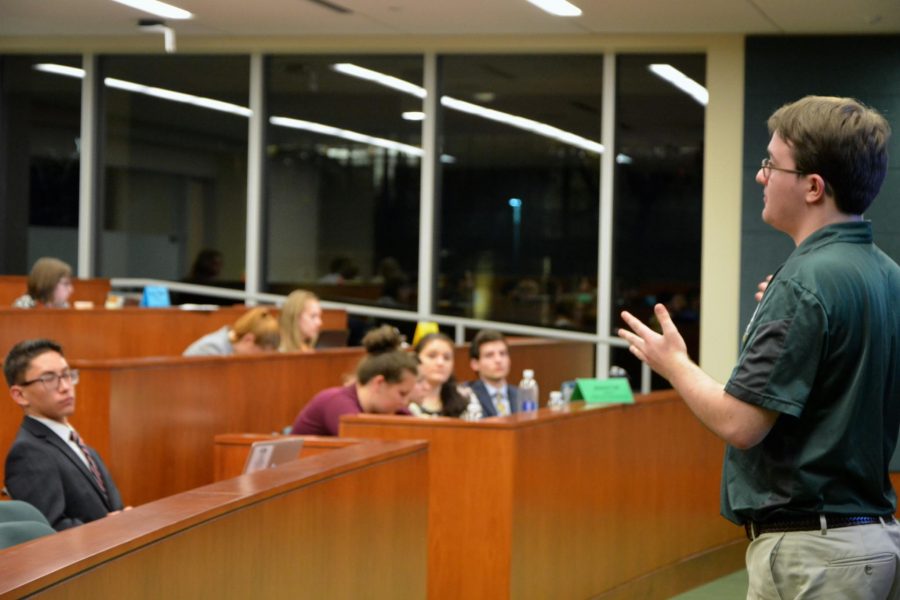 ASCSU Senator Samuel Laffey discusses a bill he authored during the Wednesday ASCSU meeting. The bill was unanimously passed, and is intended to encourage further discussion between ASCSU and CSU faculty. (Photo by Stephanie Mason)

Clarification: A previous version of this article stated that the ASCSU impeachment bill passed and therefore amended its constitution, which is not correct. The bill must be revised and voted on several more times before officially passing Feb 25 at the earliest. The article has been corrected to reflect this.

The Associated Students of Colorado State University attempted to further clarify its impeachment policies during its weekly Wednesday meeting, outlining procedures for the process that up until last semester, were unprecedented.

After a unanimous vote, ASCSU passed an impeachment bill through to another committee. The bill is intended to amend ASCSU’s constitution to include a fail-safe provision to prevent impeached senators from resigning, and then immediately seeking reelection.

According to ASCSU Vice President Lance Li Puma, there has been a recent focus on impeachment policies, because after last semester, he realized that ASCSU was unequipped to properly handle an impeachment.

“(Impeachment) has been used before, but it’s never been seen all the way through,” Li Puma said. “We had no procedure, no purpose and I couldn’t find any alumni that were VPs that had ever run an impeachment, so that’s why we had such hard difficulty with this … it’s adding some of that structure that we must have.”

The bill, written by ASCSU Chief Justice Rioux Jordan, was created in part because of last semester’s student response to the impeachment, Li Puma said.

“We listened to the concerns of the students and what we saw with the responses to the Collegian articles, and this is what we wanted to increase transparency,” Li Puma said.

The CSU Faculty Council‘s relationship with ASCSU was also discussed during the Wednesday meeting. A bill written by Senator Samuel Laffey was unanimously passed to encourage “support for continued interaction with all faculty or administrative bodies of Colorado State University,” according to the approved bill.

Laffey said he hopes to allow for “further student representation” through increased cooperation between ASCSU and faculty.