A moment of silence for Chapel Hill shooting held on Plaza 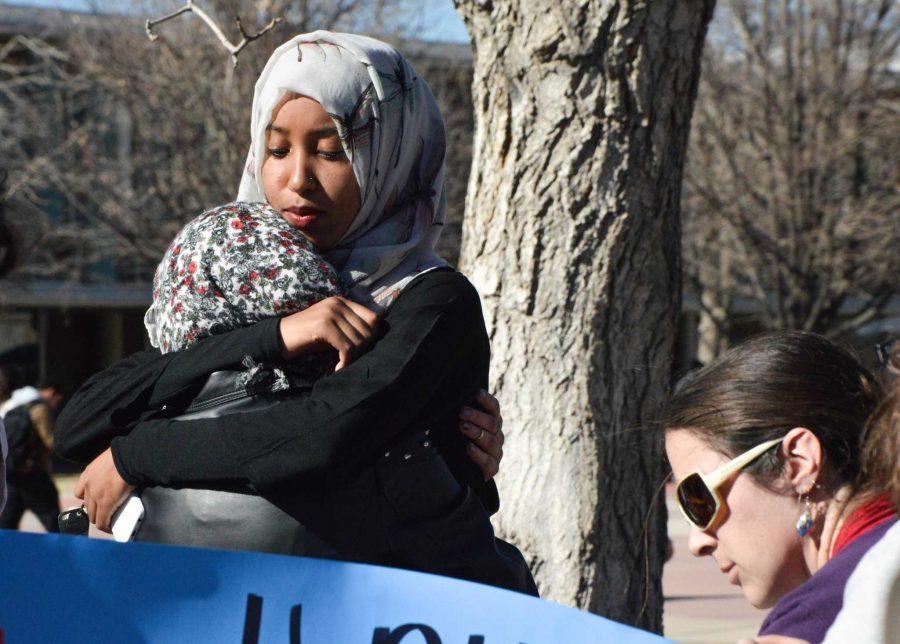 When reaching with fear for her hijab in the morning, Israa Eldeiry questions the safety of her right to practice her religion in the United States.

Though police stated that the shooting may have been over a parking conflict, there is debate over whether or not the event was a hate crime.

“According to media, fighting over a parking spot is an excuse to murder three innocent lives,” Eldeiry said. “I am here, like every one of you, to stand up for what is right and stand against injustice.”

Eldeiry made it a point to state that people, regardless of their religion and race, should be free to express themselves.

“It doesn’t matter because we are all living, breathing beings,” Eldeiry said.

The crowd of event attendees was diverse and grew with passers-by.

“I think it is terrible how people think that murder is the answer,” said student Aneska Scheck. “I am actually a Christian and I just want to support freedom of religion.”

The speaker called for a plan of action among her peers during her 10 minute speech.

“Standing up for justice does not mean just standing up and watching from the sidelines,” Eldeiry said. “No one should be afraid to represent themselves … and worry that someone will point a gun at them in their own home.”

Eldeiry expressed the oppression she felt from media coverage.

“Muslims in America are only newsworthy when they are the extremists behind the gun,” Eldeiry said.

After the silence, attendees discussed their own observations among themselves.

“I think the media is doing a great disservice to Muslims in this country and also in the world,” said Peggy Christiansen, an attendee from the Geller Center. “We are constantly only portraying Muslims in the most negative light, and not portraying incredible people that are doing amazing things in the world and their religion happens to be Muslim.”

People in the crowd hugged one another and wiped tears off their faces.

“I think the biggest thing that got to me was the fact that she said that we live in this country in which we take pride that we are a melting pot and that we accept everyone,” said event attendee Hadeel Abdel-Ghany. “And yet we let things like this happen and we live in fear.”

Eldeiry shared that she was afraid that someone might hate her because she chooses to wear her hijab in public.

“We are proud of who we are and we really do believe that America is where we can live the way we want to,” Abdel-Ghany said. “But we let this happen and go by as if it is a parking dispute and not acknowledged as a hate crime.”

The Muslim Student Association decided to run the event at their weekly meeting Wednesday night.

“We all really felt hurt that this happened and that no one was really taking any action against it,” Abdel-Ghany said. “We all decided that we needed to stand up for this.”

The event was held to correlate with the congregational prayer at the mosque so the people of the Muslim community could come after the announcement.

Though the speech given was written and revised over a course of three days, according to Abdel-Ghani, most of what was said came from the passion of the event speaker.

“It is beyond words,” Christiansen said. “I was very deeply moved by the words of our speaker.”