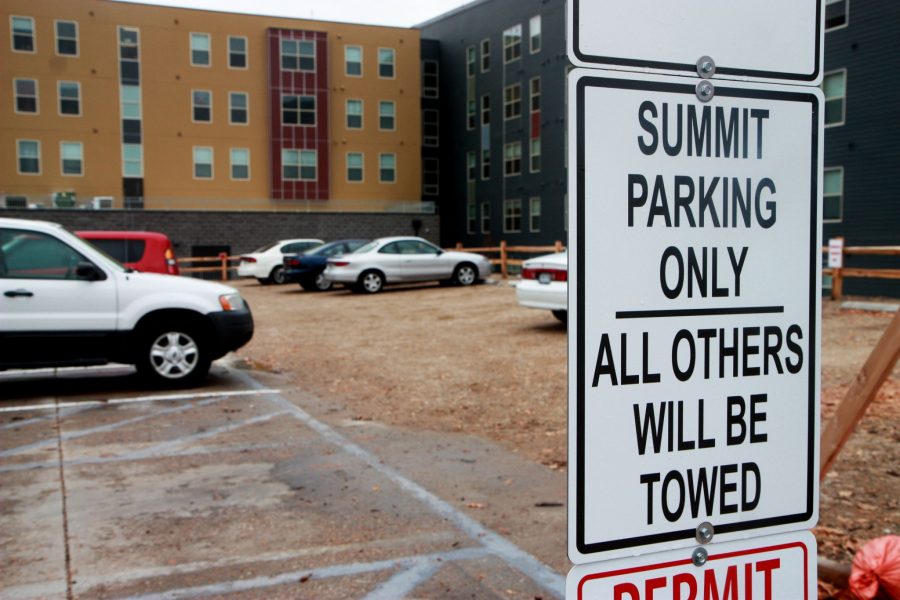 Opened at the beginning of this school year, the Summit on College provides housing to hundreds of CSU students, but has experienced problems with parking.

Plans for the parking garage at the Summit on College apartments have been approved by city council after being appealed twice by community members. Construction is expected to begin this summer.

The plan proposed to the city council in September included 345 parking spots and 2 1/2 total stories.

The original plans were approved at a public hearing in March 2014, but community members such as Jeff Leef, owner of The Laboratory located next to the apartments, appealed the plans to city council, according to City Planner Seth Lorson.

The council reviewed the plan and sent it back to the public hearing with changes, where the new plans were approved and then appealed by the same group, according to Lorson. City council upheld the second approval from the public hearing, sti

pulating that the garage not go any farther south than the current parking lot. In the newest version of the plan, the garage extends 28 feet beyond the current lot.

Jeff Jones, executive vice president of the company working on the project for the Summit, Capstone Development Corp., said the redesign is in the process and they plan to build the garage this summer.

“The conditions imposed created some challenges,” Jones said. “But we are doing our best to live with and comply with the conditions.”

Jones said they plan to have the final design done within the next month and a half.

Once the Summit revises the plans to meet the council’s requirements, the plans will not need to go through further public hearings or approvals.

The appeal notice submitted from the owners of the Laboratory stated that the review board failed to properly interpret and apply the City Code, and did not conduct a fair hearing because they considered “evidence relevant to its findings which was substantially false or grossly misleading.”

Jeff Leef, an owner of the Laboratory and one of the appellants, said one of his major concerns is that the Summit originally stated that it was transit oriented and received taxpayer money for doing so.

“Once the Summit filled up, they immediately applied for the garage,” Leef said.

He also voiced concern that the garage would not be compatible with the surrounding buildings, including his restaurant.

“It’s a beautiful view of the mountains that they would be taking away from Fort Collins,” Leef said.

Leef said that he did not feel his concerns were addressed by the city council.

“I didn’t feel they addressed the issues I had on the appeal, so I’ve decided to take it to the district court,” Leef said.

Leef said the court date is in the coming weeks.

The Summit has had issues with parking since its opening.

To remedy the issue, Ishee said the Summit gave permits to residents to other parking lots near and on campus as well as offering a shuttle, but she still said there are issues.

“I’ve waited for 25 minutes [for the shuttle] once,” Ishee said. “It’s not very time efficient, which is annoying.”

Ishee also said some students received permits for lots on campus, while others were given permits to park in a church lot on Swallow Road. The shuttle takes students from campus to the church lot and to the apartments.

Ishee said she thinks the lot would be beneficial for the apartments.

“It’s not fun not having a spot by your apartment.” Ishee said.