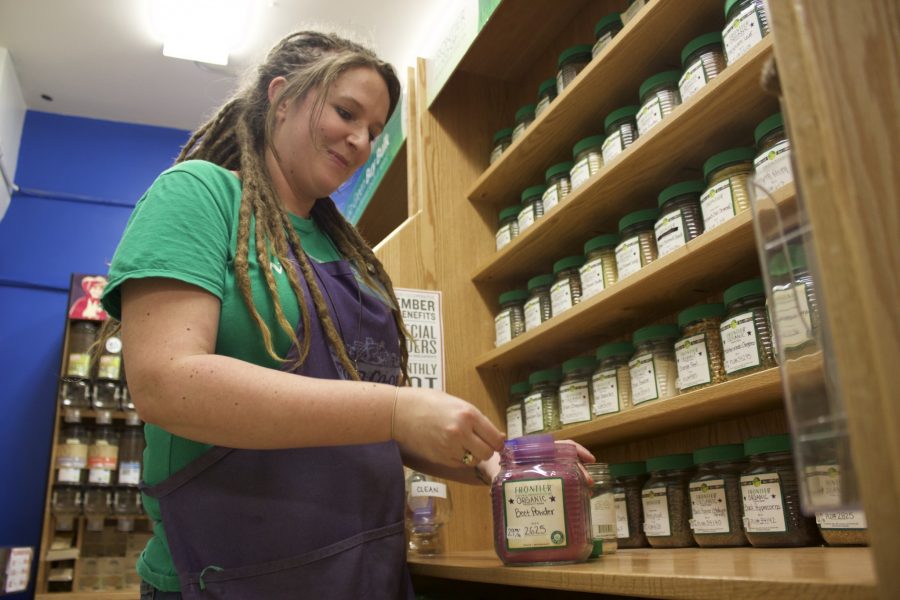 The CSU Student Sustainable Farm, the Fort Collins Food Co-Operative and the Northern Colorado Food Cluster are just a few of the groups that work with Colorado State University students to make local food available to the community.

The CSU Farm aims to produce as much organic, student-grown produce as possible, according to Ari Helland, co-manager of the CSU Farm and a senior horticulture and landscape science major.

Fresh food is sold at a produce stand on West Lake St. during the growing season of March through October.

He says that local produce is the first step that students can take to make a change in their own lives.

“We have helped keep the students’ money in Fort Collins, rather than jumping from other countries or outside of the state,” said Bryce Schaetzel, co-manager of the CSU Farm and senior crop sciences major.

The managers of the CSU Farm said that reducing carbon output, using less packaging and reducing the consumption of shipped food are all benefits of supporting local.

“We are hoping that students are just walking by and picking up produce so they are not driving to the market,” said Shauna Leibold, a junior soil and crop science major and co-manager of the CSU Farm.

The Fort Collins Food Co-Operative was started by a group of CSU students and community members who ran a buying club in 1972, according to Caroline Tracz, the outreach director. It is now a grocery store, which supplies local and organic food that is clearly labeled.

“We try to reach out to the students as much as possible,” Tracz said. “We want them to know that we have really good lunch programs and products from Colorado.”

She said that the Food Co-Operative aims to educate people about the values of supporting locally-produced food and eating healthy.

“I think it is important to support local food for community, camaraderie and self-awareness,” said Isabella Sisneros, a senior nutrition and food science major and employee of the Food Co-Operative. “By using resources within our community, we can self-regulate ourselves and be in control of what we are growing.”

During the fourth quarter of 2014, 24 percent of sales were local at the Food Co-Operative.

“Just by the amount of local food that we supply, all of that money is going right back to the community,” Tracz said. “We consider local anywhere from Colorado, and we try to support any Fort Collins company as much as we can.”

“CSU is almost like a city within a city,” Houghteling said. “Any major shifts in terms of purchasing behavior will have a significant effect on the local food economy.”

He said that the Food Cluster is working to educate the community on the economic, social and health-related benefits of eating local food.

The Food Cluster works with the Food Co-Operative to coordinate the Winter Farmer’s Markets in Old Town.

Helland said he looks forward to the CSU Farm’s growing season in the upcoming months.

“Every year it has a new or different management and it has gone from an individual to two or three people,” he said. “More smaller groups depend on local volunteers. That is an important part, giving opportunity to students to play in the dirt and watch things evolve and grow.”

Assistant News Editor Christina Vessa can be reached online at news@collegian.com or on Twitter at @ChrissyVessa.