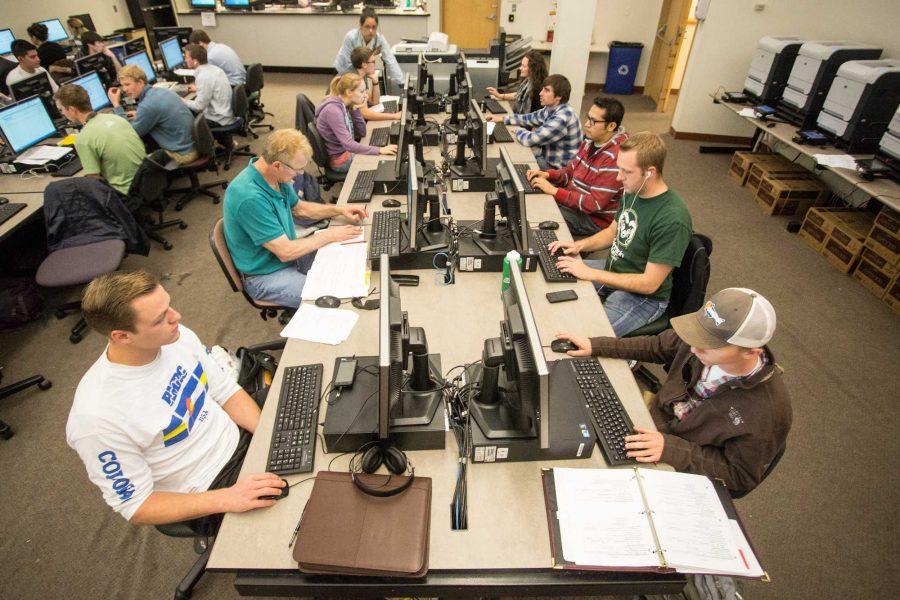 Various business students work in the business computer lab inside Rockwell hall Wednesday afternoon. The CSU College of Business was recently awarded the top Business College in the state by Bloomberg magazine.

On the first strike, students must pay a $45 fine to have their computer wiped, followed by instruction on where they went wrong. The second time, the fee is $100 and the Office of Conflict Resolution and Student Conduct Services is contacted for further disciplinary action. On the third strike, the student is permanently banned from the network.

Once a student is flagged, they are booted off the network using a system called Track-It! and cannot reconnect until they visit the library helpdesk to have the computer wiped.

Jesse Masterson, a computer tech at the Morgan Library, explained the process he follows when a student brings in their laptop for a clean up.

“We just make sure that the computer is in the system and we mark it,” Masterson said. “It’s an easy check-in process and then we wipe the computer.”

When a student illegally downloads a file on the CSU network, they may have unintentionally shared this file hundreds of times.

“Usually when a student gets flagged for illegal activity, it’s not from downloading one song,” said Steven Lovaas, IT security manager at CSU. “Whatever technology the student used to download that song might well have turned on sharing so that then other people out on the Internet could find that song on the student’s computer. The student then becomes an illegal distributor of copyright material.”

Each day, CSU is sent, on average, six to eight takedown notices from recording industries and motion picture industries, with some days spiking as high as 20.

When a Digital Millennium Copyright Act takedown request comes in, it is usually because they have found a copyrighted file publicly available on the Internet.

The University does not divulge the identity of the student to the industry unless they come back with a court-issued subpoena.

However, services are required to respond to takedown notices sent by the music, movie and gaming industries under the Digital Millennium Copyright Act.

“I think they [students] will learn if they are told specifically about what constitutes illegal downloading,” said Saad Baradan, a philosophy major at CSU. “I think a lot of it goes on with students not knowing what they are doing.”

CSU provides a set of guidelines to avoid copyright infringement and to properly show students how to file share.

“We’re in the business of teaching students about the world, and part of that learning about the world is the legal world of the Internet,” Lovaas said. “Increasing fines is hopefully a balance between enforcing the law and helping students to learn how to do the right thing.”