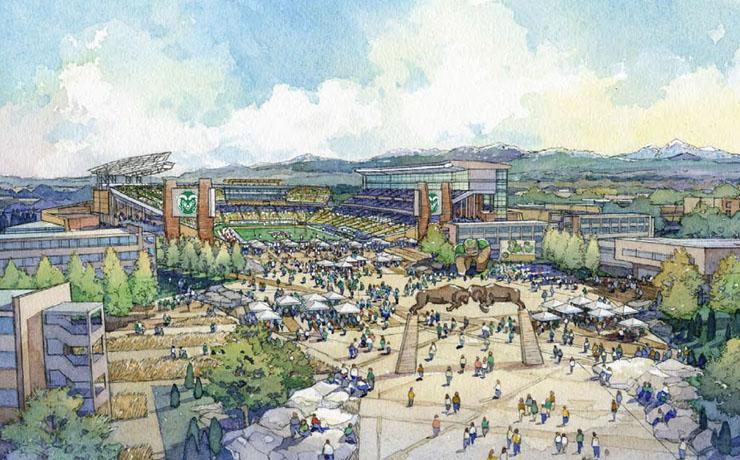 Members from the Planning, Development and Transportation department in Fort Collins presented a report to the City Council on Tuesday entitled the Colorado State University On Campus Stadium Impacts Mitigation Report.

The report discussed the impacts an on-campus stadium would have and how to address those impacts.

“It is … an analysis of community impacts,” PDT Director Karen Cumbo said. “It is not a referendum on whether to build the stadium or not, but really just to address the impacts on the community and recommend mitigation strategies.”

The study was based on game-day statistics as well as data collected in collaboration with CSU, Cumbo said.

“We can’t stop congestion, we can’t stand up here and promise that during a major event there’s not going to be traffic issues,” Jackson said. “But what we can do is manage and mitigate as much as we can.”

The study found that the stadium would require about 3,000 parking spaces off campus and estimated about 7,500 people taking transit on game days. Jackson recommended additional transit routes on game days and adding more pedestrian crosswalks to accommodate increased pedestrian traffic.

Fort Collins resident Elizabeth Pruessner expressed concerns over the cost the residents may pay in order to upgrade the city.

“The citizens of Fort Collins will not pay this $24 million,” Pruessner said. “We’ve had no choice in the stadium decision, but we certainly have a choice in whether or not we will be saddled with this expense.”

In response to the light and noise concerns, the study recommended forming a Stadium Advisory Group that would include people that live or own businesses in the surrounding area to the new stadium.

“Staff believes that the decibel levels from a football game would exceed what the neighborhood levels are within the city code,” Community Development and Neighborhood Services Director Laurie Kadrich said.

Councilmember Bob Overbeck brought up concerns over the cannon that is fired when the CSU football team scores. The 140 decibels the cannon makes greatly exceeds the city limitations, Overbeck said.

Fort Collins resident and member of Save Our Stadium Hughes Bob Vangermeersch brought up concerns over the environmental impact.

All six residents that spoke at council voiced disagreement with the on-campus stadium.

Councilmember Russ Cunniff questioned the quality of life impacts on the neighborhoods and the strain on city resources.

“My personal preference would be for CSU not to build a stadium on the main campus,” Cunniff said. “In fact, I expect each of the individual councilmembers, to one extent or the other, to have similar preferences, we just haven’t decided as a corporate body to take that position.”

Councilmember Wade Troxell voiced his concern over the fact that no one representing CSU came to the council meeting.

“I find that telling to begin with, given that this impacts CSU … why aren’t they here in some representative fashion?” Troxell said.

The council did not make any binding decisions Tuesday, but they did accept the report presented as a “good first step.” The study recommended working with CSU in addressing these concerns. The council plans to send a representative to the Board of Governors meeting on Friday.