Men in the Movement work to stop gender violence 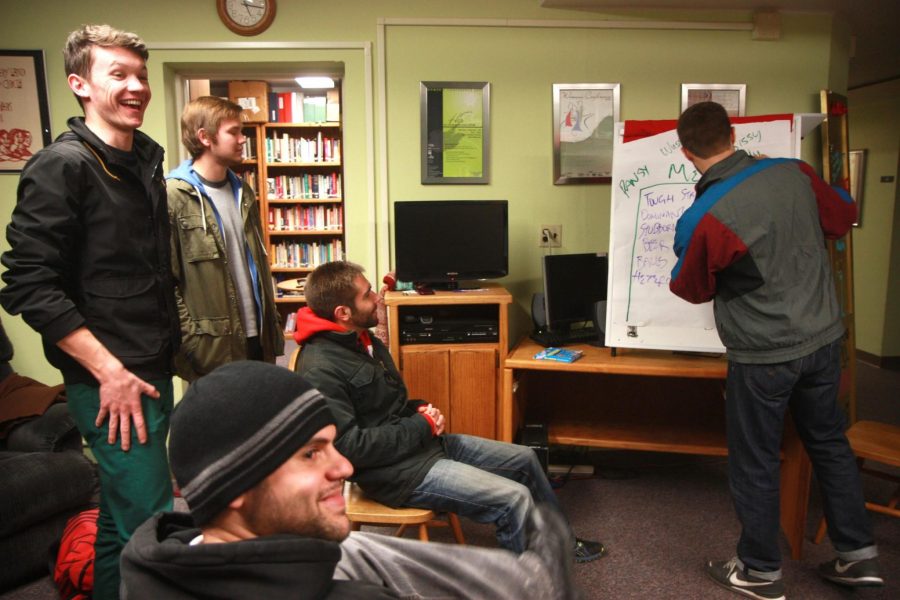 Men involved in Men in the Movement participate in on of the meetings. (Photo credit: Carl Olsen)

Men in the Movement at Colorado State University is getting involved in the issues of gender violence and gender inequality.

The group was established in fall 2012 through the Women and Gender Advocacy Center. Carl Olsen has been the coordinator of Men in the Movement since fall 2013.

The WGAC does violence prevention work, according to Olsen, and Men in the Movement engages men in the prevention of gender violence.

“Any one survivor or victim of sexual assault isn’t okay,” Olsen said. “I’d like to say that we’re trying to eliminate it, but we are definitely trying to reduce the rates of sexual violence on campus by talking to men, who are committing the majority of the violence.”

Men in the Movement is a way to address that issue, according to Olsen.

“We should be asking the questions ‘why are men committing violence?’” Olsen said. “The group is designed to address that, both within ourselves and with the communities that we are engaged in.”

“The WGAC allowed me a voice and a place to do activism on campus,” Harding said.

She also said that it is great to have men on campus talking about the role of masculinity in gender issues.

“It’s amazing to see male-identified students have a stake in the issue,” Harding said. “It’s not a woman’s issue — it’s a people issue.”

Olsen said that Men in the Movement talks about how they group up as men and how that contributes to the culture of violence seen in society.

The group currently has about 20 members, which is more than Olsen has seen in previous years.

Joe Espinoza, senior health and exercise science major, joined Men in the Movement this fall and said he has noticed that, since joining the group, he has paid more attention to how he interacts with others.

“The things that I say, the things that I hear, I’m attentive of what’s going on around me now,” Espinoza said. “Just like, a simple phrase as ‘you guys,’ like referring to guys as a dominant male group. Not everyone is a guy.”

The group meets weekly, and those meetings are for male-identified students only.

“The week-to-week group gets really, sort of, intimate and safe and trusting to talk deeper about ourselves,” Olsen said.

The group also hosts events open to anyone. This semester, they are focusing on men in the media, Olsen said.

The group’s final event of the semester will be Dec. 4 in Clark C146 at 7 p.m. The program, called “Tough Guise to Nice Guys,” will discuss the “friendzone,” according to Olsen.

To join Men in the Movement, Olsen recommended visiting the WGAC office and joining the email list or approaching Olsen or another man in the group.

Collegian Reporter Sady Swanson can be reached at news@collegian.com or on Twitter at @sadyswan.
Related articles