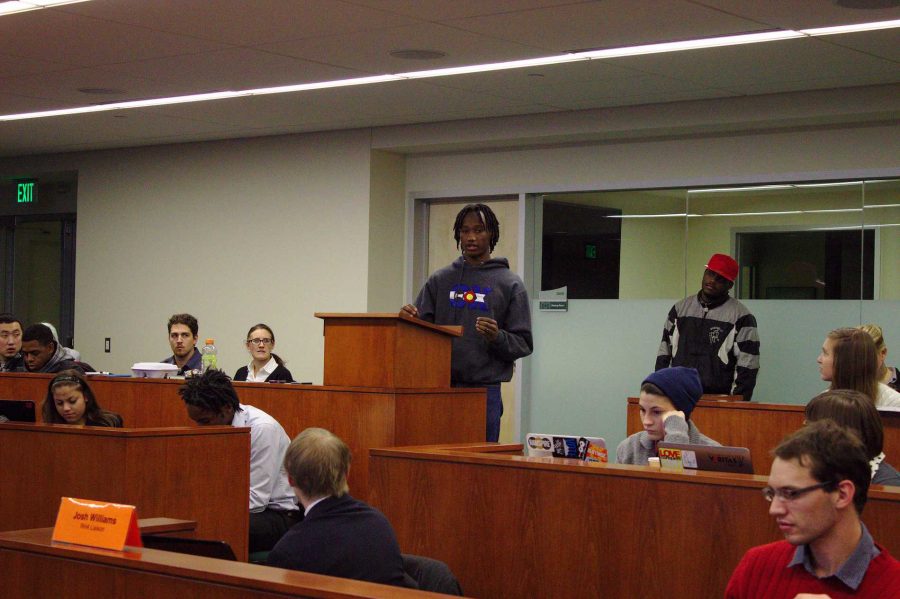 Former ASCSU Sen. Kwon Yearby held a protest Wednesday during Senate regarding his impeachment.  Yearby and several of his acquaintances spoke during gallery input, in which any member of the student body can speak to appeal to Senate.

“You all voted Kwon out without him being in here,” said Lauren Stadeker, Yearby’s fiancée and a senior at CSU.  “You got rid of the only voice for diversity.”

According to ASCSU Vice President Lance Li Puma, Yearby was not the only voice for diversity, though he did push more legislation to further diversity within ASCSU than any current senators.

The protesters spoke at length about the lack of diversity within ASCSU, mentioning how intimidating it is for a person of color to speak to Senate.

“Anyone in the room can be a voice for diversity,” Li Puma said after the meeting. “Sam (Guinn, ASCSU president) and I have taken great strides to ensure that ASCSU is diverse.  This is the first time we have had an entire department devoted to diversity, rather than just one position.”

Yearby and his friends also criticized ASCSU for how they handled the impeachment, from the presentation of evidence to the fact that Yearby and members of the media were not allowed in the room during the impeachment hearing. They again stated that they believe Yearby’s Sixth Amendment rights to due process were violated.

“We followed our constitution and the impeachment procedures,” Li Puma said.

Yearby, who contacted the American Civil Liberties Union on Friday, said he felt the impeachment proceedings were unfair.

“I don’t want to be back in Senate,” Yearby said. “I just want to make sure that all students are represented fairly.”

Yearby expressed dissatisfaction at the fact that his diversity bill was struck down, especially while he was not in Senate.

“I would say that (ASCSU) is the textbook definition on Wikipedia of inclusive,” Li Puma said.  “…Could we be more inclusive? Of course, but we are constantly working … to increase our inclusivity and diversity.”

Collegian ASCSU Beat Reporter Jonathan Matheny can be reached online at news@collegian.com or on Twitter @jonathanmathen2