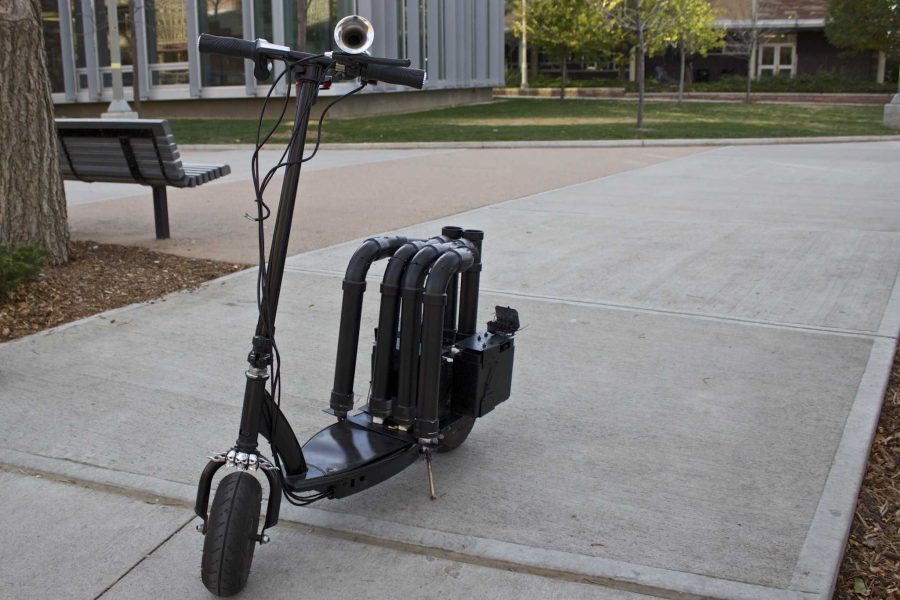 When you cross an electric-powered scooter, a hot tub and a synthesized polymer, you get self-proclaimed “troublemaker,” scientist and humanitarian Omar Abdulla.

Since then, he has been following his drive to advocate for global equality while keeping a smile on his face.

One year ago, Abdulla started Jusour, a company that has a role in building bridges in research and development to make high-end technology available and accessible to all.

“Everyone deserves this technology, but it is not accessible to them,” Abdulla said. “I am working towards providing educational resources for these less-fortunate people, so they can then utilize them to develop their own technologies.”

“My lifelong passion has always been being able to empower someone who has completely lost everything,” Abdulla said.

He is working toward ways to make resources and technologies cheaper and more accessible. A fully electric powered scooter, built by hand, is his latest development.

This project spanned 3 ½ weeks total, using only nine hours of labor and $170 to complete. Abdulla built the scooter from three recycled lead acid batteries, a recycled frame and an electric motor that he reconstructed.

Internet exploration and travels to and from junkyards and electric scooter shops provided efficient resources to build the scooter.

A Serbian electrical engineer, Nikola Tesla, had a vision of providing energy for everyone at no cost. He inspired Abdulla to create something that combined efficiency, size, range, price and “bada** factor.”

“I based it on a steampunk kind of theme, it is pretty cool,” Abdulla said.

The scooter is complete with a Bluetooth speaker, three chrome skulls on the front, a horn and an all-black finish. It can travel at a maximum speed of 22 miles per hour and is able to travel 36 miles until it needs a recharge.

Lead acid batteries helped keep costs down, according to Abdulla.

“I love messing with different chemicals,” he said, while describing how he was able to use the Internet to obtain radioactive materials from eBay. Among other things, Abdulla shows his creativity through science-related projects.

“I once dated a girl, and I synthesized a polymer for her,” Abdulla said, explaining that he used it to coat a ring with.

Plans to coat the bottom of his next invention, a 12-person hot tub, with his polymer are in the works. The hot tub is in progress because the sauna he built was “getting boring.”

He has plans to throw a hot tub party once the project is completed.

Being involved with the community is something that comes naturally to Abdulla. Some of his memberships include the Young Producer’s Organization (YPO), the League of Legends club, Premedica, a Global Ambassador for the United Arab Emirates and a leader for Partners Mentoring Youth.

“Omar likes to get things done,” said Jon Burns, a junior theatre production major who works with Abdulla in YPO.

As a young boy, Abdulla experimented with creating things that would react with air.

“I used to get in trouble in high school, because I would dump a bunch of stuff into the air conditioning,” he said.

“Omar is really busy, but whenever he is not free he just does stupid stuff,” Masri said. “Like he comes in, opens the door, dances awkwardly, then leaves.”

When he is not occupied, Abdulla has a particular sense of humor.

”This one time we were arguing about superheroes and he said that my super power would be being a pain in the a**,” Abdulla said about Masri. “So I kicked him in the a** and he was traumatized for a week.”

Abdulla is due for mandatory military service after he graduates; he plans to use his engineering skills to serve the people of the United Arab Emirates.

“Some people don’t like the way I think or do things, people who care all about money,” Abdulla said, when referring to his haters. “People say that if I get into power, the world will not be the same. I just learned to weed those people out of my life.”

Abdulla hopes that his inventions serve as a catalyst for global equality.

“We all have these resources and there is a lot we can do with them,” Abdulla said. “Why not invent ways to make these technologies cheaper.”

Collegian Assistant News Editor Christina Vessa can be reached at news@collegian.com or on Twitter @ChrissyVessa.