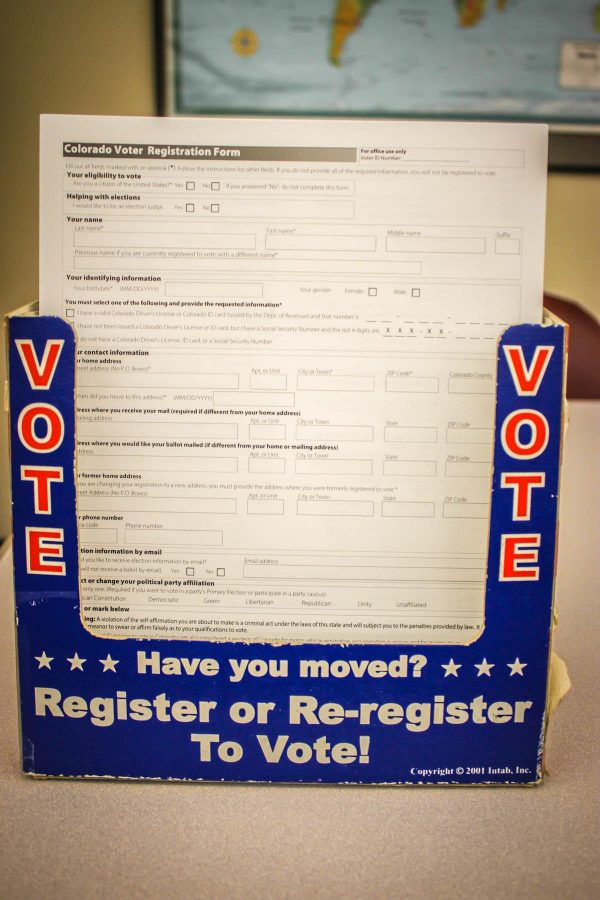 There have been reports of election judges in Larimer County warning students they could possibly lose scholarships if they register to vote in Colorado, according to Larimer County Clerk and Recorder Angela Myers.

Myers said she had to call election judges and tell them to stop influencing voters because this could be misconstrued as a way to dissuade voters.

The election judge at the Lory Student Center polling place declined to comment.

Steve Fenberg, Executive Director of New Era, a group that encourages young voters to register, said he has heard people say students can lose scholarships by registering to vote in a new state, but he said these claims are not warranted.

“I have heard of people intimidating students by saying that in every single election,” Fenberg said,”but I have never heard of an instance where it has happened.”

Myers said parents called her office and complained last election because out-of-state students lost their scholarships after registering to vote in Colorado.

“In past years, we had parents call irate who said their students lost their scholarship,” Myers said. “When that student changed their residency, their scholarship was revoked. I don’t know how that works.”

Fenberg said the Supreme Court has established that it is the prerogative of the student if they want to register to vote where they go to school.

“According to the U.S. Supreme Court, students have the right to register and vote in their college towns if they meet the same requirements as everyone else,” according to a fact sheet from the non-partisan website Fair Elections Network. “Misinformation, such as claims that registering to vote at school may jeopardize eligibility for financial aid or insurance, are sometimes used to discourage students from voting locally.”

Fenberg said three or four students told New Era representatives that they were discouraged from voting in Larimer County this election based on recommendations from election judges regarding scholarship eligibility.

He said during every election cycle he hears reports of election judges warning voters of the potential to lose scholarships.

“It’s not true, and I think it essentially intimidates voters and makes them not want to risk anything by voting,” Fenberg said. “It’s not the place for the poll worker to provide suggestions to the student.”

He said there are issues, in theory, where scholarships can be affected by voter registration, in cases of specific location-based scholarships. However, he said he has never heard of this being an issue.

“In almost every scenario (students) can register to vote where they go to school and not have any harmful affects come from it,” Fenberg said.

Fenberg and Myers both said if a student is concerned about scholarship eligibility, they should contact the provider of the scholarship and check about eligibility before registering to vote in a different state.