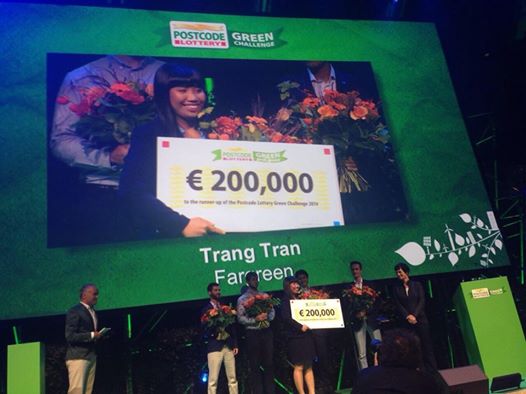 Trang Tran is presented with her 200,000 euro check at the Postcode Lottery Green Challenge in Amsterdam.

Sustainable enterprise Fargreen won 200,000 euros (close to $250,000) for first runner-up in the 2014 Postcode Lottery Green Challenge in September, thanks to its ecofriendly method of growing mushrooms.

Founded by 2014 Colorado State University graduate Trang Tran and her partner Thuy Dao, both originally from Vietnam, Fargreen works with farmers to incorporate rice straw in a closed-loop method of producing mushrooms, rather than disposing of the rice straw through traditional open burnings.

“We started Fargreen with a mission: using business as a tool … to help the rural community and build sustainable community,” Tran said.

In the summer of 2013, Tran and Thuy took a loan to fly home to Vietnam, where they experimented with their mushroom-growing method.

“Thuy and I spent that summer, a month, at the backyard of her house, growing mushroom ourselves on the straw,” Tran said. “We got the first batch of mushrooms and we sold it and people loved it and so we thought, ‘Oh wow, we can do something with this.’”

According to Asad Aziz, a CSU clinical professor of management and member of Fargreen’s advisory board, their growing process could potentially “take out tons of toxic greenhouse gases from the environment” and reduce the frequency of respiratory diseases.

Moreover, Aziz believes working with Fargreen to cultivate and sell premium mushrooms should raise farmers’ income by 50 percent, affording them more disposable income to put toward their quality of life.

“This is part of what makes CSU such a great institution: the ability to see our students thrive in a global environment, to do good things and make society better off,” Aziz said.

Fargreen participated in CSU’s 2013-2014 Venture Accelerator Program, which provides student ventures the tools, contacts and other resources to grow their startups. In the spring, the company won first place in the collegiate track and third in the enterprise track of the 2014 Blue Ocean Enterprise Challenge.

Since Fargreen incorporated in 2013, the company has raised just under 500,000 dollars from the aforementioned Green Challenge and Blue Enterprise Challenge, in addition to Tran’s 2014 Echoing Green Climate Fellowship.

“[Those funds] would definitely help us go through the next year without having to raise additional money and we’ll get to the point when we can grow organically on our own revenue,” Tran said.

Though even with that capital, there are still social and economic hurdles to growing a business in a developing country like Vietnam.

“One of the biggest challenges is that the social structure and culture doesn’t have a lot of precedence for starting your own business, developing your own workforce,” Aziz said. “Historically, the rice farmers have been doing the same thing the same way for many, many years, and so I think one of the biggest challenges has been, how do you create an infrastructure from scratch that allows you to scale a business?”

Institute for Entrepreneurship Assistant Program Director Jessica Rawley, who worked with Tran in the CSU Global Sustainable and Social Enterprise MBA program, is impressed with the progress she and Fargreen have made since leaving CSU.

Collegian Business and Technology Beat Reporter Nicholas LeVack can be reached at news@colostate.edu or on Twitter @NicholasLeVack.