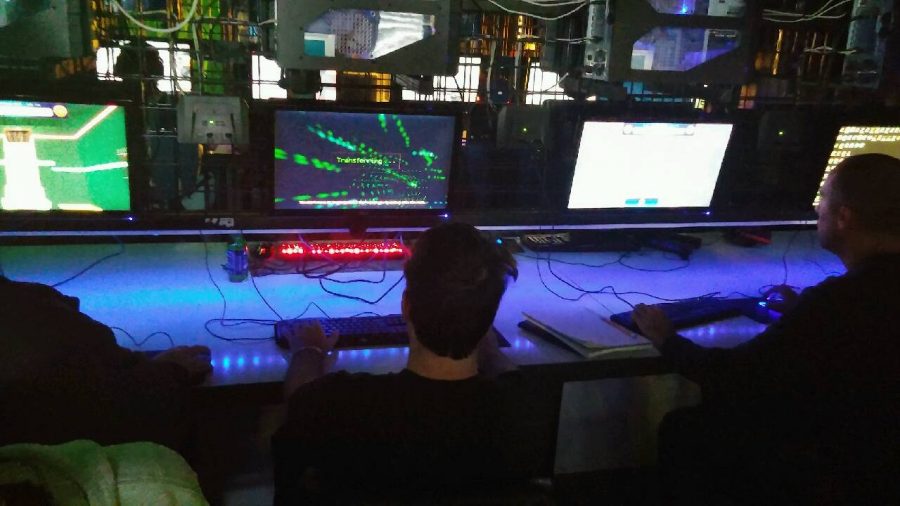 John Ternlund, a Colorado State University computer sciences master graduate who serves on IGDA Colorado’s board of directors and as Limn Interactive’s president and chief of technology, organized and hosted the expo.

“It’s just great to work together,” Ternlund said in a speech. “I think if we cross-promote each other and we work with each other, I think that’s the key to fighting against some of these bigger companies with deep pockets.”

Programmer and designer Thomas Divelbiss was there with Team Underhaus to demo Data Helix, a 3D puzzle-platformer that emerged as a capstone project for the University of Denver’s game development program.

In Data Helix, players switch from first-person to a top-down view of the map in order to rotate rooms, allowing them to reach the level’s end.

“We wanted to create a game that differentiated perspective,” Divelbliss said. “That’s where the idea of the first-person and third-person elements came from.”

Coming from a formal game development education, Divelbiss is optimistic about gaming’s potential as a field of study.

“I feel like it’s going to become more prevalent in the future,” Divelbiss said. “We were really the pioneers of the program because we were the first ones to really do anything with what we made during school.”

Earlier this year, Team Underhaus got to present Data Helix as a finalist in the 2014 Electronic Entertainment Expo College Game Competition.

“We got to meet all the other teams who also got there and all their games were really interesting,” Divelbiss said.

Serenity Forge’s shoot ‘em up Pixel Galaxy was one such game and has since become a full-fledged project for the studio.

“We saw that it had so much potential, that it was such a fun game, that we wanted to add just a little bit more to make it more fun,” said Publishing Director Hadi Gooyabadi. “If there’s a good idea, we should be able to pursue it.”

Gooyabadi said Serenity Forge serves another role: collaborating with other Colorado developers to produce their games.

As a publishing director, Gooyabadi helps with employment, legalities and any other logistical issue that could interfere with a developer’s creative process.

“If you want to make a video game and we can help you, then we want to work with you,” Gooyabadi said.

Prospective game developer Tony Caviness, who was running Clutch Gaming Arena’s Oculus Rift booth, thought the event was a great opportunity to learn from people in the field.

“I want to be a developer and I want own my own company,” Caviness said. “Having this opportunity to meet people who have done it and have done it in different ways is really great.”

Collegian Business and Technology Beat Reporter Nicholas LeVack can be reached at news@colostate.edu and on Twitter @NicholasLeVack.
Related articles