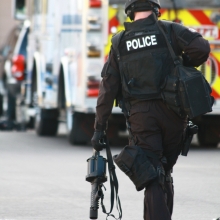 A Colorado State University student reportedly stole an ambulance Sunday morning that was on a medical call and parked in front of Academic Village Residence Hall.

The suspect, sophomore Stefan Sortlan, was apprehended by Loveland police after he was in an motor vehicle accident while driving the ambulance, according to Dell Rae Ciaravola, Senior Communications Coordinator at CSU.

Ciaravola said Sortlan was charged with felony auto theft and reckless endangerment by CSU Police. The suspect was also charged with criminal mischief for breaking a car windshield on campus the same night of the incident.

The individual that the ambulance was intended for is reported to be “okay”, according to Ciaravola.

Collegian Reporter Danny Bishop can be reached at news@collegian.com or on Twitter @DannyDBishop.