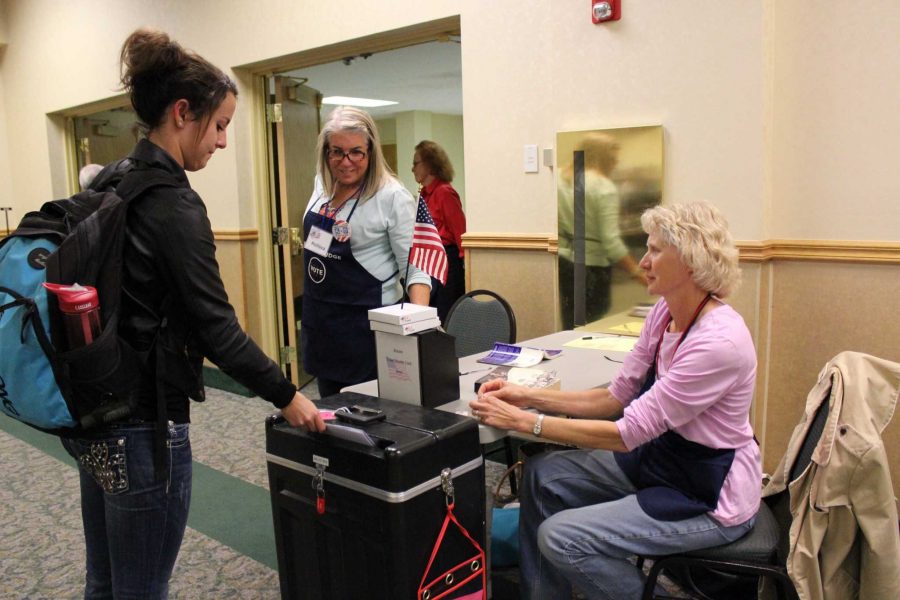 Rachel Strauss, junior health and exercise science major, turns in her ballot in the North Ballroom of the Lory Student Center on Tuesday afternoon. The ballots will be in the LSC until November 4th. (Photo credit: Chrissy Vessa)

Midterm elections are underway, but some say without the aid of name recognition, midterm elections see a smaller turnout than those that decide the President. Groups like Vote Smart are trying to change that.

Morgan Levy is a CSU senior studying political science and economics and said young voters often do not vote because of time constraints and not knowing enough about the issues.

“College-aged voters don’t have a lot of time to research candidates and issues,” Levy said. “It’s important for organizations like Vote Smart to bridge that gap so people feel confident about voting.”

Vote Smart, a nonprofit, nonpartisan voting information aggregate, which Levy interned for over the summer, provides voters with unbiased information about candidates so voters can make informed decisions based on facts.

“Political ads are marketing, just like anything else,” Levy said. “It’s not fair for anyone to be manipulated by a political campaign that seems like it’s the right info, but is just trying to advance candidates for their own purposes.”

Angela Myers, the Larimer County clerk and recorder, said every single election is important, and citizens should vote and have their voices heard.

“It’s important for everyone of all legal ages to vote,” Myers said. “It’s the foundation of our government.”

She said Colorado is an all mail-in ballot state now, but voters can register any time during the election at polling places, where they can also drop off their mail-in ballots. One of these polling places is the North Ballroom on the 300 level of the Lory Student Center located on the Colorado Sate University campus.

The New Era Colorado Foundation is another example of a nonpartisan nonprofit working to get young people engaged in politics.

“We believe democracy works better when more people show up,” said Rebecca Lehman of New Era Colorado. “There will be record turnout this year and the election will be very close. Every vote will count.”

Lehman said that now that early voting has started, the foundation is working to ensure everyone registered to vote at CSU casts a ballot on or before election day on Nov. 4.

To find out more about New Era or how to get involved, students can email Lehman at rebecca@neweracolorado.org

or call her at 970-818-2966.
“We are working to educate voters about the option to still register to vote at voter service centers, update their address and drop off their ballot,” Lehman said.
Myers said a common issue surrounding the election process is electioneering near polling places. This is when campaigning for or against a candidate takes place near a voting site. Like political advertisements, this behavior can unfairly influence voters.

Myers said any electioneering must be at least 100 feet away from the voting site.

“Voters should be very careful about observing the 100 foot law,” Myers said. “I respect enthusiasm, but don’t do it inside that 100 limit.”

Myers was recently delivered a cease and desist letter by an attorney representing Rocky Mountain Student Media after she had Collegian newspapers removed from the north end of the Lory Student Center. She said a picture of Mark Udall on the cover was considered electioneering. Upon receiving the cease and desist letter, Myers reversed her decision.

Groups like Vote Smart and New Era Colorado work to educate the public, particularly students, about the issues on the ballot and present unbiased information.

“I have worked in political parties before, and I spent time telling people how to vote, which I didn’t like,” Elliot said. “Vote Smart gave me an opportunity to research and help people make their own decisions. I’m proud of what I did there.”