University encourages employees to get back on the bike 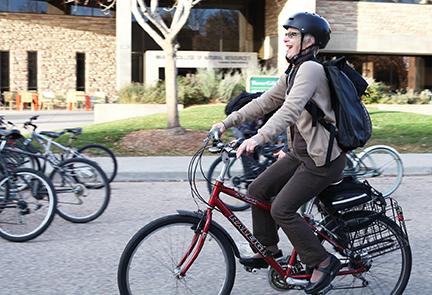 Colorado State University’s transportation department is encouraging more employees to use alternate forms of transportation on their commute thanks to the Get Back on the Bike grant awarded to the school last year.

The grant provided CSU with $20,000 to create a curriculum for two groups of 20 employees per year over the age of 50, according to Aaron Fodge, CSU’s parking and transportation manager. Participants received a helmet, a bike lock, a bike light, a bike bag and one round of bike maintenance.

Fodge said 13 employees committed to being a part of the program after 25 were invited.

Participants are encouraged to ride their bikes three times a week March through November, and once a week on average during December, January and February, Fodge said. They may also ride their bike to a bus stop and take the bus the rest of their commute.

Participants began the program Oct. 1 and will continue to track their mileage and other commuting habits on smarttrips.org the rest of the school year, according to Amanda Fitzpatrick, education and outreach coordinator in CSU’s transportation department.

“Every person that comes into the program has to sit down with us for half an hour and we go through the routes for them,” Fodge said. “We put in a good day’s worth of work in with these folks.”

Fodge also said they use Google Maps to identify routes and mileage for each rider.

Participants took a traffic skills class, completed a fitness test and went to at least six of the eight lunch-and-learn sessions to understand the curriculum developed for the program.

Fodge said that people do not bike to campus for many different reasons, and that the goal of this program is to help people overcome those reasons.

“You need to work through their challenges,” Fodge said. “Challenges could be … just getting started. It’s the unknown of how long it’s going to take [to bike to campus].”

Fodge also said there was a concern that, when employees bike to work, they do not have access to showers.

“They [may] really want to ride their bike, but, like, they don’t want to be smelling like a zoo all day,” Fodge said.

Other concerns included snow, low visibility and being too dark out, according to Fodge.

Carol McCloskey, who works in small animal reception at the Veterinary Teaching Hospital and is an instructor in the veterinary school, said she joined to become healthier, but had some safety concerns.

“I looked for alternate routes or side streets,” McCloskey said when discussing how to overcome her concerns.

She also said she is making use of the Spring Creek Trail.

In 2013, 42 percent of campus employees were over the age of 50, according to Fodge. He felt this program would be important for the campus community to keep the majority of the staff healthy and active.

“In a lot of ways, it’s a wellness program,” Fodge said.

After the grant is finished, Fodge said that he would like to expand the program and fund it through the transportation department.

“It usually only takes about five to 10 minutes longer [to bike],” McCloskey said. “[Biking] gives you a sense of empowerment.”