Service and assistance animals at CSU provide a helping paw 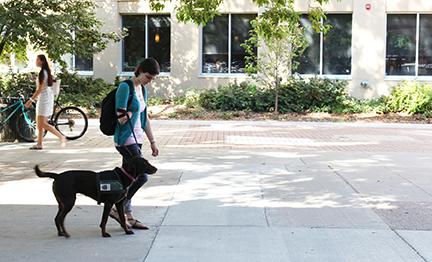 Every day across the Colorado State University campus, dozens of students are accompanied and assisted by their service dogs and assistance animals.

The CSU Resources for Disabled Students office maintains that there are two types of animals allowed on campus: service animals and assistance animals. The former directly performs tasks for individuals, while the latter helps to reduce the symptoms or effects of a disability.

In accordance with the Americans with Disabilities Act, CSU defines a service animal as, “Any dog that is individually trained to do work or perform tasks for the benefit of an individual with a disability, including a physical, sensory, psychiatric, intellectual, or other mental disability.”

Only dogs are recognized as service animals on campus.

“I trained her myself,” said Reinhart, an animal sciences major. “It made that bond so much stronger because it’s not like she had to listen to someone else, then all of a sudden switch over and listen to me.”

Assistance animals, occasionally referred to as emotional support animals, accommodate students with disabilities in numerous ways, according to Rosemary Kreston, the University’s director of RSD.

Alabaster, her cat, has been living with Chisholm since finals week in May. Chisholm said that the orange tabby keeps her calm and centered.

“Having a life be dependent on you, being responsible for another life; it kind of puts things into perspective,” Chisholm said.

Assistance animals, unlike service dogs, are not allowed inside classrooms and recreational facilities. They are permitted only in the University’s housing residences.

Whether it is a cat, a rat or a reptile, Kreston states that assistance animals can include anything that helps center a person.

“These are not pets,” Kreston said. “They are assistance animals.”

According to Reinhart, it is quite common for people to want to pet Amora when she is working. Whether or not Reinhart allows others to pet her service dog often depends on the situation.

The Americans with Disabilities Act prohibits individuals from asking persons with service or assistance animals why they require the animal.

“The only thing they are allowed to ask is, ‘is this a service dog?’” Reinhart said.

The University’s regulations require service dogs to “be identifiable to others through a visible signifier.”

“With Amora, I have a little badge and on the back it has the Americans with Disability Act,” Reinhart said.

Kreston claims that vests and harnesses work to dissuade individuals from attempting to pet or distract service dogs.

“People bring their dogs to campus,” Kreston said. “It’s better for the person with the service dog to have some indication, because otherwise people will just think it’s their pet.”

Whether they are helping students with low vision or recognizing and assisting during seizures, service and assistance animals perform their daily duties all across campus.

“A lot of professors don’t realize I have a dog until I turn in my first test,” Reinhart said. “They’re like, ‘She’s been here the whole time?’ Yup, everyday.”