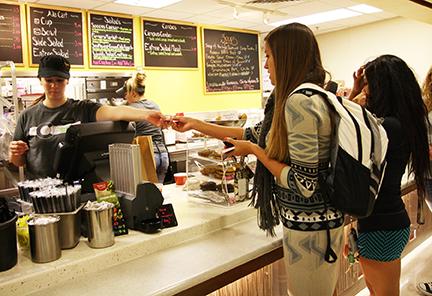 Freshman engineering major Lauryn Shirley uses Ram Cash to pay for her meal at Spoons. Shirley said she has never had an issue with Ram Cash personally, but has witnessed others have troubles around campus. (Photo credit: Dina Alibrahim Fike)

The words “RamCash is down” became all too familiar for students and faculty between Sept. 17 and 24, as vendors like Morgan’s Grind and Cam’s Lobby Shop found RamCash intermittently out of service.

For many students and faculty members, service interruptions mean more than not getting their coffee fix. Many RamCash customers depend on the service for food, laundry or even haircare.

“I’d use it on laundry,” said Megan Jenni, sophomore human development and family studies major. “Then with what I had left, I went and got my hair cut and dyed.”

Likewise, Allie Salz, sophomore social work major, needed RamCash to make up for what she could not get out of her campus meal plan.

“I only had 10 meal swipes my freshman year,” Salz said. “So for breakfast, I’d go to the bagel place in Lory.”

While several vendors displayed “RamCash is Down” signs for hours at a time, RamCard Office Associate Director Peter Martinez believes that did not reflect the actual length of the outages.

“Really, I think the longest (interruption) that we had was around 10 minutes,” Martinez said. “The challenge is that, for some vendors … they swipe a card and suddenly it’s not responding in the way that they expect it to, so they put an out-of-order sign and just stop accepting it. The system might be back up in 10 minutes, but they’re not trying it because they’re just under the impression that it’s down.”

In addition to reporting outages, Martinez said vendors should be testing their systems to see if RamCash has gone back online.

“The venues now have ways to do that,” Martinez said. “We’ve shown them some tips and tricks to determine whether the system is available or not.”

During the outages, the RamCard Office offloaded system tasks to parts of the day when they were not handling so many RamCash transactions.

“We just wanted to make sure that all the pipes were clear, that traffic flow would come uninterrupted from all of the venues,” Martinez said.

Though there have been no reported service interruptions since Sept. 25, they cannot know whether they got to the root of the problem.

“Maybe we have, but I haven’t gotten to say, ‘Hey, we know what it is, it’s done, and it’ll never happen again’ – I couldn’t tell you that,” Martinez said. “It’s kind of like an ongoing process.”

For RamCash customers wanting to pose their questions and concerns by phone or email, Martinez ensures that their feedback will not fall on deaf ears.

“We don’t just let it go in one ear and out the other,” Martinez said. “We certainly don’t want any kind of service interruption to occur again. We do our best to be as proactive as possible.”

Where to spend your RamCash